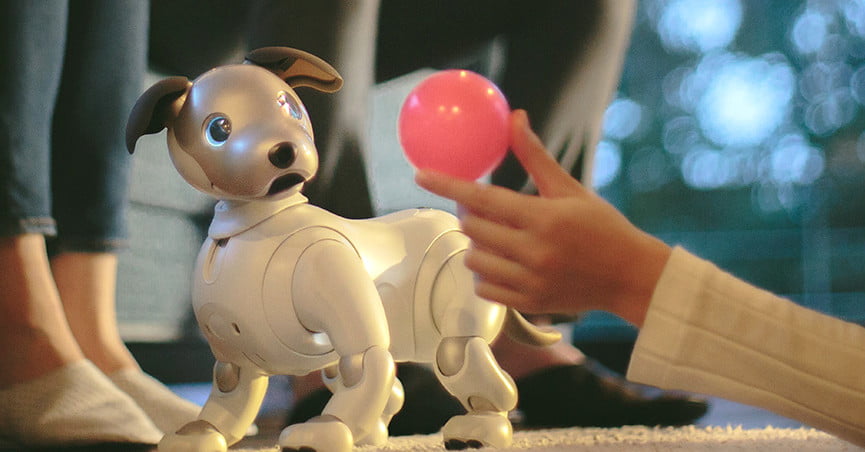 Sony’s robotic pet is proving popular with dog-loving tech fans … or is that tech-loving dog fans?

The latest version of Aibo launched in Japan in January, with the electronics company this week revealing the highly specific sales figure for the device — 11,111 units — for the first three months of this year.

Aibo is currently only available in Japan, though Sony says it’s considering taking it to the American and Chinese markets, too. It hopes the device can act as a companion for people who might not have the time or means to care for a real dog.

The four-legged robot originally launched in 1999 before being taken off the shelves seven years later after selling 150,000 units, according to The Mainichi.

Considerably cuter than the original robot, Sony’s redesigned Aibo comes with a new pair of OLED eyes that “sparkle with a clever twinkle” to give it multiple facial expressions, some of which are well beyond the capability of a living-and-breathing pet mutt.

Aibo has cameras behind its eyes so it can avoid knocking into obstacles, while built-in sensors allow it to realistically express a fear of heights as well as help it avoid tight spaces where it might get stuck.

Just like a real dog, Sony’s robotic canine can respond to a variety of spoken commands, among them a few that you wouldn’t ordinarily ask a dog. For example, shout “take a photo” and it’ll do just that, though at only 30-cm high, Aibo’s snaps will all be taken from a rather low perspective.

Perhaps best of all, the refreshed Aibo moves in a much more natural manner than its predecessor, with its new set of built-in actuators allowing it to perform “hundreds” of different movements and gestures.

The biggest difference, however, comes with the addition of artificial-intelligence smarts. This means that over time, Aibo will modify its behavior and respond in different ways as it gets used to its owner’s unique characteristics.

Without any clear explanation, Sony also programmed Aibo so that it “loves anything pink” — no, we’re not sure what that’s all about, either. The company also says Aibo will be “a little mischievous from time to time,” with a video showing it lifting its leg by some furniture. Fortunately it’s not so realistic that any liquid pours forth.

While Sony continues to promote sales of Aibo, a recent Japan Times report confirmed that tech company A-Fun is continuing to bless “deceased” Aibos (old ones that no longer work) in a special ritual held at a centuries-old Buddhist temple near Tokyo, with around 800 of the dog-like bots having so far undergone the traditional send-off. Digital Trends reported on the unusual ceremony in 2015.

The ritual gives some comfort to owners who had formed emotional attachments to their pet “dog,” while A-Fun can later perform a kind of organ donation by disassembling the device to retrieve useful parts that can help fix other tech products.