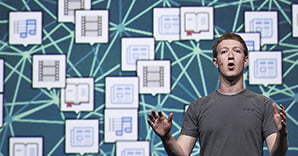 Facebook is working around the clock to address users’ privacy concerns in the wake of the Cambridge Analytica scandal. One of the steps the social network is taking is to address the issue of email-targeted ads.

Tech Crunch reports that the company is planning on launching a certification tool that will require marketers to prove that the email addresses they use in their ads were obtained via legitimate means, as opposed to any sort of hacks. Facebook will also prevent the sharing of custom data across multiple business accounts.

The message obtained by Tech Crunch says that “for any Custom Audiences data imported into Facebook, Advertisers will be required to represent and warrant that proper user content has been obtained.”

A Facebook representative did confirm that the social network was working on a certification tool in order to prevent future abuses.

“We’ve always had terms in place to ensure that advertisers have consent for data they use but we’re going to make that much more prominent and educate advertisers on the way they can use the data,” Facebook spokesperson Elizabeth Diana said.

Diana said that this move was not in response to any specific event, but also said that Facebook planned to review its agreements with third-party data firms to ensure that the data was being responsibly used and had been legitimately obtained. Facebook declined to comment on whether or not a specific company had been banned from the service due to violations of these privacy polices.

Cambridge Analytica made use of Facebook’s powerful Custom Audiences advertising tool. The service was launched in 2012 and allowed businesses to upload email addresses and phone numbers from their customers in order to help advertisers target them with specific ads. Facebook has always had a policy mandating the appropriate use and protection of custom data, but the social media giant hasn’t always enforced those policies for a variety of reasons.

The scandal surrounding Cambridge Analytica, in which pro-Trump and Brexit messages were sent to voters, likely motivated Facebook to step up its enforcement policies. Beyond that, the scandal even prompted a rare public apology from Mark Zuckerberg.

There are some steps you can take to protect yourself on Facebook, or if you’d rather move on, delete your profile entirely.