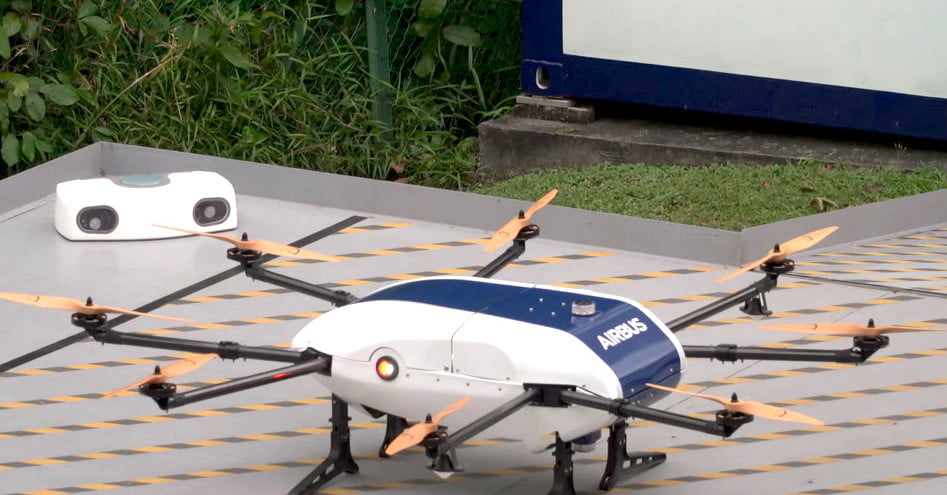 Keen to prevent the competition from racing away, Airbus is getting into the drone delivery game with its own autonomous flying machine.

A slew of companies are developing and testing drone delivery platforms, among them Amazon, Google, Walmart, and Airbus rival Boeing.

The system uses so-called “parcel stations” located in places such as the top of high buildings. As the video above shows, the drone flies onto the station, whereupon automatic sliders gently push the UAV into the precise position so it can receive a parcel from below.

With the drone ready and waiting, a robotic arm inside the station grabs the designated parcel before passing it through an open space in the roof and attaching it to the drone. The machine then flies off to make the delivery at another parcel station, with the robot taking the package from the drone and placing it in a locker for collection. A notification is then sent to the recipient who can come and fetch it at a time of their choosing.

Airbus’s octocopter weighs around 55 pounds (25 kg) and can carry packages of up to almost 9 pounds (4 kg).

Leo Jeoh of Airbus Helicopters said that Project Skyways is an effort to solve the tricky challenge of making drone deliveries in urban areas, with its system focusing on high-tech collection and drop-off points rather than deliveries to home addresses.

The recent demonstration at the University of Singapore was declared a success by those involved, although Jeoh said Skyways is “not fully there yet to be able to launch a service.”

The executive elaborated: “What we need to do is to be able to master the autonomy aspects of navigation, ensure the safety level of our product … and then launch the service on the university campus, and from there understand what it takes to operate and maintain the system … and whether it makes commercial sense to develop this to the next stage.”

The idea of using a docking station reminds us of another system developed by California-based startup Matternet. Working with Swiss Post, the drone delivery system is now up and running, transporting medical items between health facilities. The drone lands on fixed docking stations and deposits the package securely for an employee to come and collect by scanning a QR code.

While the likes of Amazon grapple with the challenges of developing a drone system that can safely deliver goods to customers in urban areas, fixed delivery stops for specific services look set to gain traction first.