Save Hyrule by harnessing the power of the Zelda-themed IPA

The Legend of Zelda: Ocarina of Time is one of the best video games ever. From the story to the gameplay to the ability to replay it time and again, it will go down in history near the top of the pile. You can disagree, but you’d be wrong. For many of us, Ocarina of Time was one of the cornerstones of childhood (or perhaps even its predecessors, The Legend of Zelda on NES or A Link to the Past on SNES). If you didn’t have it, your best friend did, and that led to hours upon hours of gameplay, passing the controller back and forth, trying valiantly not only to defeat Ganondorf, but to collect all those damn Skulltulas while you were at it.

Reminiscing yet? Us too.

That warm fuzzy feeling that was brought on by thinking about Zelda was what made us so excited to see that an Atlanta-based craft brewery has taken their love for Zelda to the next level by brewing a new beer: Triforce IPA

Second Self Beer Company’s  Triforce IPA is a slightly hazy IPA that is made to embody the sacred relic’s three pieces: power, courage, and wisdom. To do that, Second Self made the beer with three types of malts (oats, wheat, and barley) and three types of hops (Mosaic, Amarillo, Cascade).

If you’ve ever wondered what the taste or smell of victory over Ganondorf was, this beer is it. On the nose, you’ll find papaya, mango, and other tropical fruits while the body of the beer is soft and balanced. 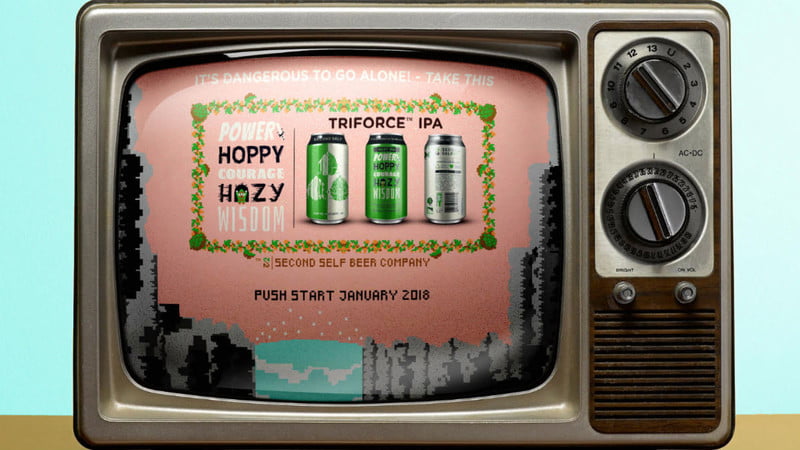 The genesis of the beer (should we say the Nintendo of the beer, in this case?) came from the brewery founder’s love of the game, and the will to make something brand new for their brewery.

“We wanted to create something that is not like anything we have done before. We started with an IPA with a touch of wheat and then decided to use oats as well to soften the mouthfeel. In the end, we ended up using the three base malts [mentioned above],” says Second Self co-founder Jason Santamaria. “For the hops, again we wanted to do something different than before. We went with Amarillo and Mosaic for most of the hop bill giving the beer an exotic tropical fruit nose and taste. We added a touch of Cascade to give the beer a classic IPA bitterness. In the end, it seemed only fitting this beer was meant to be Triforce.”

In terms of how they paired what they created with the iconic series, Santamaria calls it a “chicken and egg situation.”

“Because of my love of the game, I’ve wanted to have a beer with this name for a while; however, the beer had to be something really special and had to really work with the theme. It wasn’t until we finished the beer that we knew we had Triforce,” Santamaria says.

According to Santamaria, the beer pairs well with tacos, barbecue, ceviche, and magical potions. (It probably wouldn’t pair well with Lon Lon Milk, but hey, you do you.) As for the labeling, artist Keith P. Rein (who also created the artwork for Second Self’s Manic Pixie Dream Beer #1) was back on Epona’s saddle for this beer as well.

It also has to be noted that this isn’t the first time (or the last) that Second Self has created a pop culture-influenced beer. The brewery has two goses — Maverick & Gose and MIG: Margarita in Gose — that are inspired by, you guessed it, Top Gun. (Volleyball scene not included with purchase.)

Triforce IPA is available in cans and on draft around Georgia and Alabama.