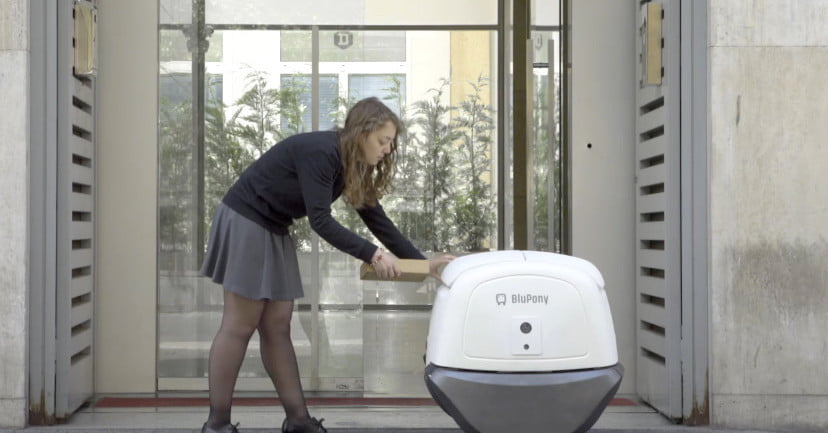 Small, wheel-based delivery robots continue to be of interest to many startups around the world, though considering the tragedy that befell this hitchhiking robot a few years ago, it’s hard to know if the human race is ready to fully embrace the idea of autonomous robots trundling along the street by themselves.

One outfit that isn’t giving up on delivery robots is E-Novia. Based in Milan, Italy, E-Novia is currently testing YAPE — short for Your Autonomous Pony Express — a compact self-driving robot that has an impressive range of some 50 miles (80 kilometers).

Bringing to mind Piaggio Fast Forward’s Gita robot, YAPE moves along on two wheels and self-balances while reaching speeds of up to 12.4 mph (20 kmh), according to New Atlas.

Able to transport packages weighing up to a hefty 154 pounds (70 kilograms), YAPE uses a combination of sensors, cameras, and GPS to navigate sidewalks and other off-road routes such as cycle lanes to reach its destination. It also communicates with sensors fitted to traffic lights and other road equipment so it can respond to fast-changing street conditions.

When it reaches the delivery address, the recipient simply shows their face to YAPE’s facial recognition camera to unlock the compartment containing the package.

“YAPE is simple to use thanks to an app connected to a control platform,” E-Novia explains on its website. “To send packages via YAPE, all you have to do is input the destination address in the app, or simply [input]to whom the package is addressed, leaving the task of finding the correct address to YAPE’s GPS system. On delivery, the recipient will only be able to open the package compartment using a facial recognition system.”

It all sounds rather cool, though regulatory hurdles will need to be overcome if such technology is ever to make it into the mainstream. And we still worry about ne’er-do-wells who believe it’ would be hilarious to throw a blanket over YAPE as it goes on its merry way, or simply lift it up and toss it into a canal. Remember poor ol’ HitchBOT.

If a secure delivery system can be worked out, then we’re right behind YAPE and other similar designs offered by the likes of Starship Technologies and DHL. Heck, robots like these don’t even have to go out by themselves — they could simply act as a personal helper or robotic companion that follows you around and carries your stuff.

E-Novia will be showing off YAPE at CES 2018, and DT will be there to check it out.