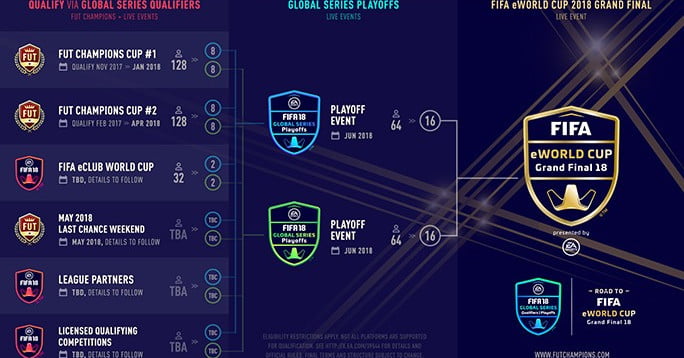 eSports is growing in popularity, with new tournaments and events every year.

EA Sports has announced a new global eSports event for FIFA 18 culminating in the first-ever FIFA eWorld Cup next August. Qualifying begins November 3, with several rounds leading up to the main event.

From November 2017 through July 2018, the tournament will feature several qualifying rounds where you can compete for a spot in the playoffs. There will also be qualifying events for recognized pro players and current teams to gain an entry.

By next summer, the field will be winnowed down to 128 participants — half on Xbox One and half on PlayStation 4. Dubbed the “Champions Cup,” these players will face off against each other in live events until only eight remain. Then it’s on to the FIFA eWorld Cup Grand Final.

Todd Sitrin, SVP and GM of the Competitive Gaming Division at EA, said in a press release that the plan is to build on the rising popularity of eSports in the new worldwide tournament. “Last year was a pivotal achievement for competitive FIFA, engaging millions of competitors and spectators through world football,” he said. “In partnership with FIFA, we’re accelerating the growth of competitive gaming.”

The Madden Championship has been a huge success, and EA is hoping to replicate its popularity by partnering with FIFA. “Competitive FIFA is a global entertainment phenomenon that maximizes the combined power of world football and competitive gaming in unprecedented fashion,” Philippe Le Floc’h, Chief Commercial Officer at FIFA, said.

To participate, you need to first register for the tournament. You can qualify through FIFA Ultimate Team (FUT) online competitions and at live qualifying events throughout the year. Get ready for the qualifying events with our FIFA 18 FUT strategy guide to build your team into a powerhouse. It’s available now, bu if you’re new to the FIFA series, you can also grab the free demo and try it out.

We found FIFA 18 to be a game you can play for months at a time, with stunning graphics and smooth, engaging competitions. The Ultimate Team mode adds “Squad Battles,” allowing you so score new cards and coins by playing single-player matches and comparing your performance to others in online leaderboards.

EA is promising lots more information about the various tournaments soon, with official leagues representing real-life clubs, so start practicing now and get ready to face off against competitors from all over the globe.