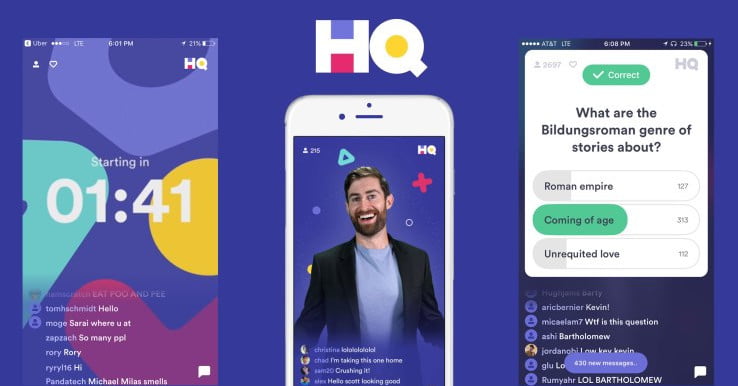 If you’re the expert at your local pub trivia night, you’ll enjoy the interactive fast-paced fun of HQ.

Online trivia games are nothing new, but a new iPhone app lets you compete against thousands of other players in a game show format with cash prizes up for grabs. The HQ trivia app, from the makers of Vine, is played live twice a day and cash prizes are awarded to the players left standing at the end.

Inspired by game shows like Who Wants to Be a Millionaire? and Jeopardy, the show is hosted by Scott Rogowsky and consists of a dozen multiple-choice trivia questions. Pick the right answer within 10 seconds, and you move on to the next round. A wrong answer means you’re out, although you can still watch the action unfold and add your own comments. Any players left standing at the end split the prize pool and collect their winnings via PayPal.

Former Vine co-founders Rus Yusupov and Colin Kroll have already gotten several million dollars in initial funding. “We all grew up watching Jeopardy and Wheel of Fortune. That’s our basis for this kind of stuff,” Yusupov told TechCrunch. “We just wanted to make something that people play … with their friends and family.”

The game itself takes place live daily, with a starting time of 3 p.m. and 9 p.m. ET (12 p.m. and 6 p.m. PT) every day. The game show format and live video presentation combine to make it an addictive experience that you want to return to again and again.

The prize pools are fairly modest at present, only a few hundred dollars or so, but the creators say they’re open to trying sponsored games to offer larger payouts. “We’ve been playing around with options,” Yusupov said. “This Sunday we did a sponsored game that let us give away the biggest prize.”

In 2009, Microsoft ran an interactive game show on the Xbox 360 called 1 vs. 100, based on the TV show of the same name, and it drew hundreds of thousands of players per night. For years, Microsoft has been promising something similar for Xbox One, but we have yet to see any details.

HQ doesn’t yet have those kinds of numbers, but give it time. People love trivia, and it’s getting more and more players every night. As Yusupov put it, “It’s a way to give people a chance to have fun, maybe win, maybe learn something new.”