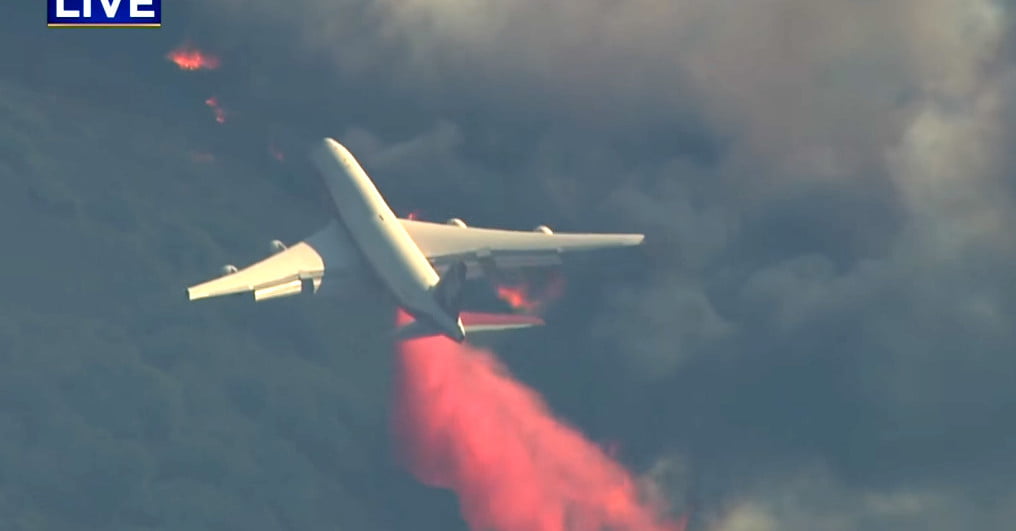 The 747 SuperTanker is doing what it can to quell the deadly fires burning in Northern California.

You know it’s serious when you see the world’s only 747 SuperTanker fly overhead.

Dubbed “the world’s biggest fire extinguisher,” this awesome aerial firefighting machine has been called in to help with ongoing efforts to deal with wildfires devastating parts of Northern California.

The modified Boeing 747 is capable of dropping nearly 20,000 gallons of fire retardant in one go, and earlier this week it made six flights in the space of a single day from Sacramento to affected areas in Napa and Sonoma counties around 40 miles north of San Francisco. Each flight lasted between 31 and 47 minutes.

Footage broadcast on live TV earlier this week showed one of the 747’s runs, with the aircraft flying at low altitude to target the borders of burning expanses of dry vegetation. Reports suggest that 17 people have so far died in the fires, with more evacuations ordered on the evening of October 10.

The California Department of Forestry and Fire Protection (Cal Fire) called on the SuperTanker — operated by Global SuperTanker Services — as part of wider efforts to prevent the devastating wildfires from spreading further. The plane can fly with up to five non-crew members, for incident monitoring and mapping purposes, and can put down a line of retardant up to a mile long.

“If your house were on fire, would you call the fire department and ask them to send me the slowest, smallest fire truck you’ve got? Probably not,” Global SuperTanker Services CEO Jim Wheeler told the San Bernardino Sun recently, adding, “This is a force multiplier for the fire departments because there’s nothing else out there like it.”

The aircraft can get to any location in the mainland U.S. within about three hours from its Colorado Springs base. Since going into service eight years ago, the 747 SuperTanker has been called upon by several governments around the world, flying over fires in Spain, Israel, and Chile.

More often filled with passengers traveling to far-flung places, Boeing’s 747 aircraft, distinctive for its front-end hump, went into service in 1970. Until Airbus’s A380 came along in 2007, it was the biggest commercial airliner in the world in terms of physical size, and even had the power and strength to give the Space Shuttle a ride.