The LG V30, the successor to the LG V20, is less a follow-up than a top-to-bottom re-imagining. Gone is the V20’s secondary ticker display, replaced by an edge-to-edge screen and narrow top and bottom edges. The V30 has a powerful dual camera, and hardware that’s on par with the leading flagship smartphones.

But there’s never been more competition. The LG V30 competes squarely with Samsung’s Galaxy S8 Plus, which shares roughly the same dimensions. How does it fare? We pit LG V30 vs. Galaxy S8 Plus to find out.

The V30 and Galaxy S8 Plus share more in common than a processor. They have the same amount of RAM (4GB) and the same 64GB of base storage, along with a MicroSD card slot for expandable space. They both use Bluetooth 5, and support NFC — though the S8 also has MST technology used for Samsung Pay.

When it comes to internals, the V30 and Galaxy S8 are as evenly matched as phones come. LG says it optimized the V30’s architecture for heat management and dispersion, which could give it a slight advantage in some benchmarks. But considering the phones have the same processor, storage, and RAM, and we’re expecting the two phones to handle apps and games about the same. 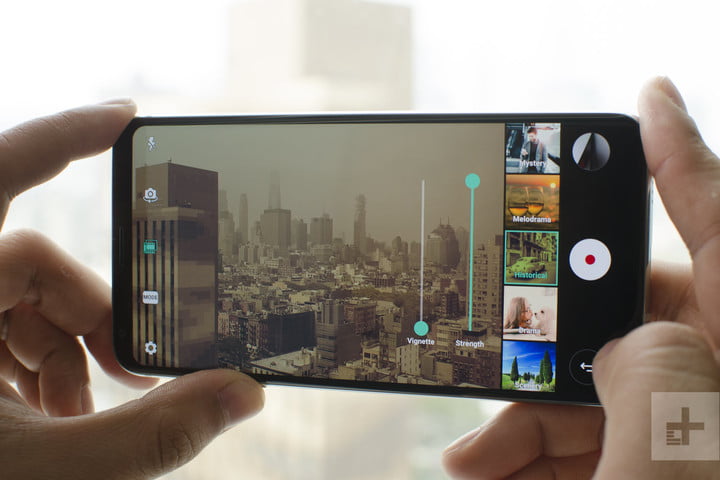 The V30 might be similar to the Galaxy S8 Plus on the inside, but it’s a different story on the outside.

The V30 trades its predecessor’s secondary display for a 6-inch screen that’s curved on all four corners. It extends the full length of the phone’s front, with thin borders on the top and bottom. The Galaxy S8 Plus has an edge-to-edge screen too, but with a crucial difference: It’s curved on both sides. This gives you more screen real estate (and it looks cool), but may make it harder to grip the phone.

The contrast between the V30 and Galaxy S8 Plus are more pronounced on the back. Both feature slightly protruding dual-camera modules, but the V30 has a circular fingerprint sensor in an easy-to-reach position, and it doubles as a power button. Meanwhile the S8 Plus’ fingerprint sensor is next to the camera and it’s hard to reach. It also makes it too easy to accidentally smudge the camera with your finger.

Both the V30 and the Galaxy S8 Plus have glass on the back and front, and they’re both IP68 rated to withstand water up to 1.5 meters for 30 minutes.

It’s tough picking a winner here. Design is subjective, and we think both the S8 Plus and V30 look great. The V30 does have a slightly sharper screen, and the fingerprint sensor isn’t in an infuriating spot, so we’re giving it the win.

The V30 technically should have worse battery life than the S8 Plus, but in our initial testing it doesn’t seem to be the case. The V30 has a 3,300mAh battery, slightly smaller than the Galaxy S8 Plus’s 3,500mAh battery, but we’ve been seeing phenomenal battery life on the V30. The S8 Plus will last you a day plus some change, but we’ve been ending most work days with the V30 with a little under 50 percent remaining. It’s impressive.

Both phones benefit from the Snapdragon 835 processor’s efficiency optimizations, and they both support wireless charging. While the V30 and Galaxy S8 Plus support fast charging, it’s not the same standard. The Galaxy S8 Plus has Samsung’s Adaptive Fast Charging, which fully charges the S8 in about 90 minutes, while the V30 has Qualcomm’s QuickCharge 4.0. Qualcomm says it can deliver up to five hours worth of power in five minutes.

The V30 and Galaxy S8 Plus are quite close in the battery department, but we’ve seen the V30 outperform the S8 Plus in battery life already.

When it comes to cameras, the V30 and Galaxy S8 Plus couldn’t be more different.

LG’s dual camera trend continues with the V30. The rear shooter has one 16-megapixel sensor and second 13-megapixel sensor with a wider angle. It puts them to good use: The V30 can capture wider-than average crowd and landscape photos; the V30’s Point Zoom mode lets you control the pace and focus of the zoom; and Cine Video puts expertly color graded filters at your fingertips. The V30 has a f/1.6 aperture, a world’s first in a smartphone.

The Galaxy S8 Plus has a a single 12-megapixel sensor that hasn’t changed all that much from the Galaxy S7’s camera. Its 1.44 micron pixel size and f/1.7 aperture shoot great low-light photos, and the dual-pixel design speeds up autofocus. The Galaxy S8 Plus has Selective Focus, which adds a blur or bokeh effect with software around a subject. Sadly, the results don’t always look natural.

The front cameras are a bit more comparable. The V30 has a 5-megapixel wide angle camera. The S8 bumps the count to 8 megapixels, but we expect roughly the same quality when it comes to selfies.

The V30’s dark horse is a Hi-Fi Quad DAC, which delivers 32-bit playback on headphones and the phone’s loudspeakers and comes with four pre-defined audio profiles. Generally speaking, you can expect music and videos to sound better on the V30 than on the Galaxy S8 Plus.

It’s too soon to tell which camera reigns supreme, but we’re letting the V30 have the round. Its dual cameras give it a little more flexibility than the Galaxy S8 Plus, and its abundance of photo tools (more on those later) are icing on the cake. 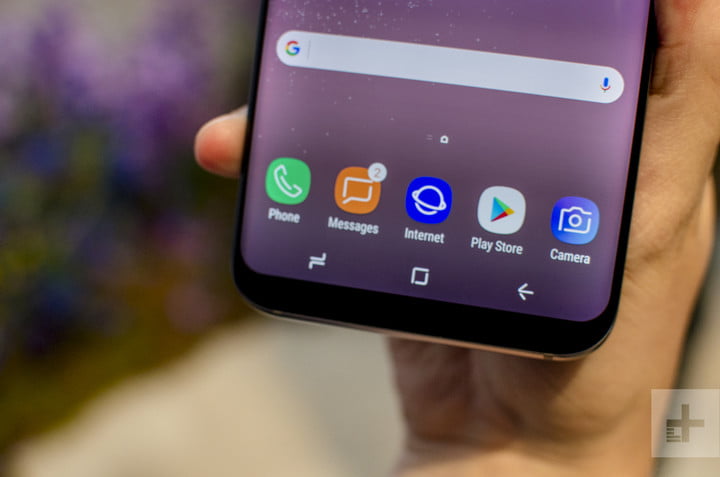 The Galaxy S8 Plus ships with TouchWiz, Samsung’s Android skin. Perhaps the highlight is Samsung’s Bixby assistant, which taps into the 10 different Samsung apps that come pre-loaded on the Galaxy S8 to serve up contextually useful information. It uses voice and image recognition to identify objects, recommend products, and more. TouchWiz also supports the Dex Station, a dock (sold separately) that transforms the Galaxy S8 Plus into a fully functional desktop replacement. When the Galaxy S8 Plus is in desktop mode, you get a Windows-like interface that supports mouse and keyboard input, and a suite of free productivity apps.

The V30 doesn’t skimp on software features. It runs a version of Android that’s pretty close to stock, save a few aesthetic changes. But it comes with Graphy, a camera feature that lets you mimic the style of an “inspiring image,” and Cine Effects, which lets you apply up to 16 different color-grading presets before you shoot a video. There’s Video Studio, an editing suite that lets you trim and merge files into a full-length clip. There’s also the Floating Bar, which is meant to replace the lack of a secondary screen on the V30; it lets you quickly access shortcuts.

Unfortunately, neither phones run Android Oreo, the newest version of Android. Both Samsung and LG have committed to updating their phones in the future, but for now, both the LG V30 and Galaxy S8 Plus are stuck on Android Nougat (though the V30 runs Android 7.1.2 versus 7.1.1 on the S8).

On a strictly feature level, the Galaxy S8 Plus wins the software round. While the V30’s experience is a little closer to stock Android than TouchWiz, apps like Dex and Bixby are huge value adds if you have the hardware (and the patience) to take advantage of them. The S8 Plus also works with the Gear VR for virtual reality, and the Gear 360 camera.

The Galaxy S8 Plus is available from every major carrier and retailer, including Verizon, AT&T, T-Mobile, Sprint, Amazon, Best Buy, Walmart, and Target. It starts at $850 unlocked, and most carriers offer it on a monthly payment option.

We’re expecting major carriers to sell the V30 when it launches later this year, but LG hasn’t published pricing and availability. The Galaxy S8 Plus wins by default on availability — you can’t buy the V30 yet. But if the V30 undercuts the S8 Plus on pricing, it’ll be a tougher call.

There’s no doubt that the V30 is the best smartphone LG has ever released. It packs a powerful processor, a beautiful screen, and a capable pair of cameras. And if LG’s claims about the V30’s audio are true, it’ll sound absolutely fantastic.

But the V30 isn’t perfect. It doesn’t feel as great in the hand as the Galaxy S8 Plus, and it lacks Samsung’s software suite. Depending on the price, the Gear S8 Plus may very well hold its own.