Huawei is rumored to launch a tablet at the soon approaching Mobile World Congress 2017 in Barcelona. Reports earlier speculated the device to be a Huawei MediaPad T3. It now appears the same has cleared Chinese certification site TENAA. 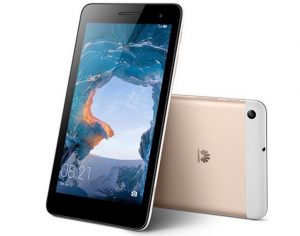 Seen in the picture is Huawei’s MediaPad T2

The MediaPad T3 is an upgrade to last year’s that the company launched in two variants – MediaPad T2 and MediaPad T2 Pro.

Thanks to the TENAA listing, we can not only confirm the specs, but also the probability of it being showcased at the MWC that will begin on February 27.

On the MediaPad T3, Huawei has packed an 8-inch display (800x1280p resolution) with a unibody metal design. Under the hood, you have a 1.4 GHz quad-core processor that is paired with a 3GB RAM and 32GB storage (expandable to 128GB).

As for the latest MediaPad T3, the cameras are just ordinary at 5MP on the back and 2MP on front. The battery is of 5,650 mAh. Connectivity options include 4G-LTE, Bluetooth, WiFi and GPS. There will also be the dual-SIM card slots.

Just in case the specs don’t impress, the operating system underneath should give a reason to try. The MediaPad T3 is expected to come with Android 7.0 Nougat out of the box.