With less than two months for the Indian Premier League (IPL) 2017 to begin, domestic smartphone maker Intex has launched an Android device named after the team it owns. Part of the Aqua lineup, the new Lions 4G retails at Rs 5,499 ($82) and will be available in two flavors – Grey and Champagne. 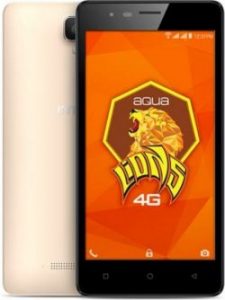 Aqua Lions 4G comes with Android 6.0 Marshmallow out of the box (Intex)

Towards the specs, you have a 5-inch (480×854 pixel resolution) display and a 1.3GHz quad-core Cortex A7 Spreadtrum SoC paired with 1GB of RAM. For storage there is 8GB that is expandable to 32GB via microSD card.

As the name suggests, this will be a 4G phone that will also support LTE, 3G, WiFi and Bluetooth. The dual-sim smartphone will also be powered by a 2,800 mAh battery.

In terms of pictures, the new Lions 4G has smaller sensors compared to Young 4G that boasts of 5MP front and rear cameras. In Lions 4G you have a 5MP rear camera with dual-LED flash and HD video recording ability. It also supports Face Detection, HDR and Panorama.

Additionally, there is also a 2MP front snapper for selfies and video calling. The device will run on Android 6.0 Marshmallow.

The Lions 4G is a follow up to last year’s Lion’s 3G which Intex launched through Amazon India. The device was named after the Gujarat Lions, an IPL team owned by Intex.