Google’s Android Wear 2.0 has been the talk of the town recently. Officially launched on Wednesday, the Wear 2.0 is the first major update to the wearable OS since the platform launched two years ago. And as was rumoured earlier, LG was the first to introduce the software in its new LG Watch Style and LG Watch Sport. They both differ in price by $100. But which ones should users choose? We have it all covered here.

Firstly, the software takes the stage front and centre. It is Android Wear 2.0 that makes these smartwatches smart. Now everything is aligned and fits on the screen, it adapts to every shape that watches can throw at it, plus it provides access to all the right apps perfect for the user’s wearable. Without compromising on performance. Another highlight about this OS is that for the really capable smartwatches out there, it can even replace the user’s phone as well. The design of the OS is simply phenomenal, with less confusing navigation as was with the previous generation. Everything now moves either up or down and users get Google Assistant on tap, whenever they need. So, buying any of these two devices will always be a right choice because Android Wear 2.0 is just that good. 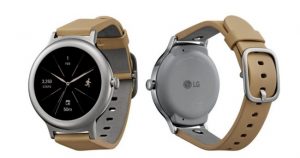 The LG Watch Style is the cheaper of the two and comes in a quite normal-looking body. It does hold a slightly large footprint on the user’s hand and comes packed with all the basic features of the smartwatch. The screen size is just 1.2-inches with a resolution of 360×360. There’s water and dust resistance, 512MB of RAM, 4GB of internal storage. The LG Watch Style is the smallest Android watch ever made, and also features one of the smallest batteries we have seen at just 240mAh. LG does promise that the watch will last for a day, but that is subject to real-world testing. The only thing unique that the Style brings to the table for itself is that it has the convenience of interchangeable straps. Apart from that, it is a pretty normal smartwatch, perfect for first-timers or just light-users in particular. The Style will cost about $249 when it hits the stores.

r waterproofing for swims makes this smartwatch leagues ahead of the Style. It’s also got a larger 480×480 1.38-inch display. The Sport is a lot more functional and is more interested in literally replacing the user’s smartphone. It’s also got a beefier 430mAh battery to make up for all that extra power. The Sport is definitely the more equipped of the two watches, and is meant for the serious fitness user. That being said, users will not be able to interchange the straps like they would be otherwise able to do on the Style. The $349 price tag should justify the added equipment and capabilities of the time piece.

What is similar about these watches is that they feature Snapdragon’s Wearable-exclusive chipset – the 2100 and the presence of Android Wear 2.0. The Style comes with just one physical button, while the Sport comes with three. According to Trusted Reviews, both watches also come with their own scroll button that can scroll between different screens across the interface. A good idea for when the user is wearing gloves.