It is not just Samsung that has a tablet lined up for Mobile World Congress 2017, Lenovo also has a variant on deck. Official renders of the Lenovo Tab3 8 Plus has leaked, coming a day after the tablet was spotted on a benchmarking site.

The leaked images of the Android tablet revealed the blue and silver color versions, also showing the ports and camera sensors. Two Tab3 8 Plus models are rumored – one a WiFi only version and other a 4G LTE one. Posted on Notebook Italia, the tablet shows a sleek design with beautifully designed curved edges.

Earlier, the same Android tablet had appeared on Geekbench, showing a Snapdragon 625 CPU and Android 6.0 Marshmallow as the operating system. Tab3 8 Plus will pack a 8-inch full HD (1920x1200p) display, 3GB RAM and 16GB storage. 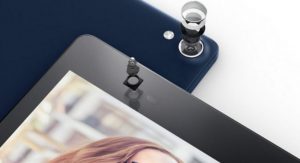 Other highlights include the 8MP camera with LED flash on back, 5MP front camera, Dolby Atmos stereo speakers and 4,250 mAh battery. As for connectivity, it will support 4G LTE, Wi-Fi and Bluetooth. There is no word on pricing or availability, but if Lenovo unveils the Tab3 8 Plus in February, by end of March it should hit retail stores.