Bluegogo is a smart new application-based bike sharing platform, for those who’d like to rent bikes and return them at any public bike-rack. 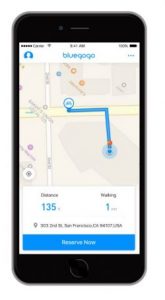 According to Digital Trends, the platform will be launched in the U.S., in San Francisco first.It will make the entire city work as a bike-sharing hub, with multiple places in the city acting as docks for bikes to be taken or left. This can be so that there won’t need to be any set dock for the bikes, giving users the freedom to pick and leave the bikes wherever convenient.

Thanks to a combination of the company’s smartphone app and GPS positioning, users will be able to locate any of the bikes that are closest to them and the company will know where their bikes are in and around the city. As protocol goes, if a user wants to rent a bike, they can search for the closest bike, reserve it for use, unlock it once they find it and also pay Bluegogo all through the mobile app.

Most other bike sharing companies have designated bike stands to collect bikes from. Bluegogo doesn’t. As of now, the company has rented out parking spaces in busy San Francisco neighbourhoods to start off with, so customers can pick up their rides and drop them as well.The bikes themselves are standard cycles. They have signature blue frames and are solar powered. In order to unlock the bike to use it, the user must scan a QR code that’s found on the frame or the handlebars. Each bike is also fitted with its own alarm that gets alerted whenever it’s being picked up without unlocking.

If this project works well in San Francisco, Bluegogo will have an entire market to look out to for potential users of their platform. Currently, Asia and Europe have a huge market in the bike-rental segment. The US still is far behind. Maybe now would be a good time to make America fit again.