Nintendo Switch is finally official. The new gaming platform will go on sale on March 3 in Europe, Japan and the US. It will be priced at $299.99. 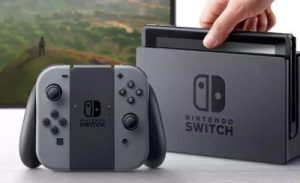 The latest gaming console was unveiled at an hour-long event in Tokyo on Thursday. At the outset, the Switch is a hybrid handheld/set-top gaming device that you can play on your TV or on the move.

The tablet’s 720p touchscreen will have capacitive touch functionality. It will also include 32GB of internal storage, which can be expanded with Micro SDXC cards.

The battery life of the Switch in tablet mode will range from 2.5 to 6 hours depending on the game. The Legend of Zelda: Breath of the Wild, for instance, will be playable for approximately 3 hours before the battery dies.

Towards the game titles, for the uninitiated, Switch games come on cartridges known as game cards; the system does not contain a disc drive. The first exclusive game for Nintendo’s new Switch console is a party game called 1-2-Switch. Here are other game titles to look forward to — 1-2 Switch, Mario Kart 8 Deluxe, ARMS, Splatoon 2, Super Mario Odyssey, Xenoblade Chronicles 2 and Dragon Quest.

Nintendo said more than 50 game software makers are developing 80 titles for the Switch. Of those, eight will be available at the time of launch in Japan.

Nintendo president Tatsumi Kimishima briefly announced on Thursday that Nintendo is introducing a more fully-featured online service. It’ll be free at launch, but in fall of 2017 Nintendo will start to charge for it.

According to Nintendo, subscribers will get to download and play a NES or Super Nintendo game “for free for a month”.

The Switch console comes four years after Wii U, the worst-selling major home console in Nintendo’s history. The system debuted in 2012 with the base model costing $299. It only enjoyed sales of 13.36 million units worldwide, as of September 30, 2016.