Sony has lifted its line-up of Extra Bass Headphones and speakers up a notch, with its announcement of some new headphones as well as wireless speakers at CES this year.

Ever since its glory days being at the helm of the Walkman label, the Extra Bass was just a little feature found on one of those devices. Now it’s a label in itself. Sony spoke of four new headphones making their appearance at CES 2017. The biggest of them are the MDR-XB950N1 and the MDR-XB 950B1, with the specs remaining the same on both of them, with just the N1 having active noise cancellation.

Both will feature NFC and Bluetooth for pairing of devices and have Apt-X as well as AAC codec support for better sound quality. As far as battery life is concerned, the N1 should churn out about 22 hours before it stops and the B1 should give out about 18 hours, which is interesting, as Sennheiser also has announced two similar headphones, one with noise cancellation and the other without. And the noise-cancellation headphone has lesser battery-life than the one without.

The third offering is the wired kind – the MDR-XB550AP. They’ve got 30mm drivers as well as an inline remote with mic for calls and music playback control. There’s even an Android app so users can customize the controls. The fourth offering is the MDR-XB10AS. The smallest offering, these are earbuds with a sporty design and are wired. The design is also sweat and rain resistant with hooks on the buds for comfort. 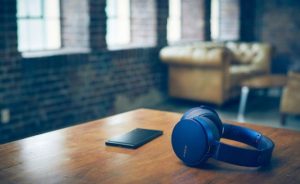 The flashiest and highest-end of these bad boys is the SRS-XB4. The name isn’t so sexy, but it’s got LED light effects, strobe lighting and illuminated speakers. It’s also a good replacement for a lamp! Of course, the lights will sync with the rhythm of the beats and the colours will change based on the mood of the music. Not that people will be noticing those details so much, but it’s a good touch nonetheless. It’ll run for a solid 22 hours according to a report by PhoneArena and they’re also supposedly splash proof as well.

The other two offerings are the SRS-XB30 and SRS-XB20 which aren’t as fancy as the big brother, but still come with more conservative lighting. The last one of the portable speakers is the SRS-XB10 which is supposedly Sony’s most portable speaker right now. It’s got a single speaker that can transmit to all directions and can be paired with another one for stereo sound. It’s water resistant and can last for up to 16 hours of playback.

All of them will be available in the Spring of 2017.