Gboard, the rebranding of Google’s keyboard app has reached one of the biggest milestones that an app can reach – 500 million downloads and counting. This puts it in the 500 million club whose members exclusively include DropBox, Google Photos, Super Bright LED Flashlight and Skype. 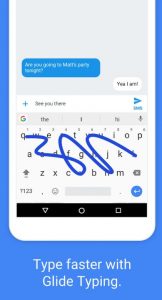 Gboard made it easy to search Google for things that the user wants, directly from the keyboard app itself. That way, users can search for nearby locations, images, videos, articles, scores and everything while they type their texts. It’s always been a pretty intuitive and convenient solution for those who like doing most of their task in a singular window and Gboard really did fulfil that wish to a lot of users.

A neat way how Gboard managed to get so far in such less time is because since the Google Keyboard used to come pretty much pre-installed on all Android devices, so is the Gboard now. Which means most major manufacturers would have their phones decked out with the latest Gboard app. But that’s exempt from big OEMs who like to keep their own keyboard apps on their phones.

The Gboard has faced stiff competition from the likes of TouchPal, SwiftKey and Swype Keyboard. The app has reached the 500 million to 1 billion downloads mark, so it’s somewhere between that number as of now. Not much else is mentioned as to the exact estimate of downloads, but this will have to do for now. The number is counting fast, surely.

The ability to type in multiple languages at the same time, along with the other features mentioned above, make it better than the rest of its competition. But it’s still a bit off in terms of usability. But that depends on the users. The added bonus of customization options and themes however, makes it quite a catch!