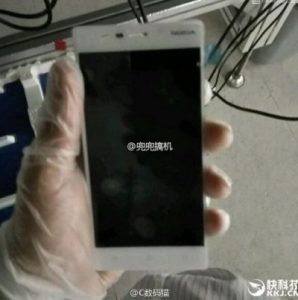 The alleged Nokia D1C leaks on a Chinese website (PhoneArena)

There will be two versions of the D1C – one being a mid-range and the other a high-end flagship. An image of the mid-range model leaked and was posted for readers.

According to PhoneArena, the photo appears to have been taken inside a manufacturing facility. In addition to the photo, some sketches of both the models as well surfaced.

Specifications of the phone have been leaked several times. Nokia D1C will sport a Snapdragon 430 processor, Adreno 505 GPU, Android 7.0 Nougat and will come in two display sizes.

Reports state the rear camera will be 13MP for the smaller sized phone, while the bigger one will sport a 16MP rear camera. For selfies, there should be a front camera of 8MP. The Android phone is also rumoured to come with waterproof capability

This will be Nokia’s comeback in partnership with HMD Global which has a 10-year brand licensing agreement for mobile phones and tablets.

There have been some renderings for the D1C in black and white finishes. Both could feature a metal frame and a plastic rear. You can expect the devices to hit store shelves by the first half of 2017.