The USB 3.1 “Type-C” standard has introduced several new features not present in previous generations of USB. One of these capabilities that’s most interesting is the ability to negotiate “Alternate Modes” which — if both sides of the connection support the same mode and agree — can dedicate some of the physical wires in the USB-C cable for transmission of non-USB signals like video.

One of the most widely adopted Alternate Modes is one for transmitting DisplayPort. This enables the ability to carry a native video signal over USB, allowing an additional display to be connected by adding a simple, inexpensive adapter cable to the USB-C port on compatible systems. Today, we are excited to announce the release of Plugable’s new USB Type-C to DisplayPort adapter cable which harnesses this new “DisplayPort Alternate Mode” functionality in order to connect DisplayPort displays to your USB 3.1 Type-C system! 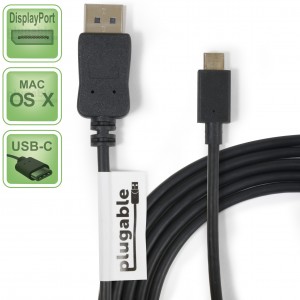 USB-C Alternate Modes provide a direct pipeline to the system’s graphics processor, and our adapter allows the attached display to function optimally, with no additional software or drivers to install – just plug and play.

It’s important to note that there are many different USB 3.1 host implementations at this point, and many do not yet support Alt Mode functionality. A good thing is Intel has baked in support for “DisplayPort Alternate Mode” alongside Thunderbolt 3 in their Alpine Ridge and later chipsets. So most future systems based on Intel’s latest chipsets (6th gen and later) will have this baked in.

Some of the more popular current systems that support Alt Mode are the Apple Retina MacBook 12″ (2015 and 2016), Google Chromebook Pixel (2015), Dell XPS 9350 and 9550 (13″ and 15″), Lenovo Yoga 900 13″, and Razer Blade Stealth, with many more new systems to be released this year and beyond. We recommend checking with your system’s manufacturer regarding Alternate Mode capability via USB Type-C or on our USBC-DP product page as we update compatibility information as more systems are coming out and tested.