Lenovo’s Yoga Book will be soon launching in India. The company has sent out media invites for an event to be held on December 13. The 2-in-1 was first showcased at IFA 2016. The thinnest laptop hybrid launched at a price of $499 (Rs 33,800) for Android version and came in two variants. 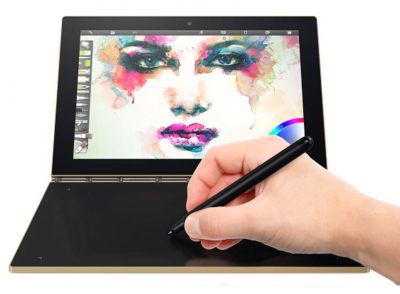 Coming in both Windows and Android versions, the Lenovo Yoga Book has a capacitive touch panel which can used as a drawing pad. It also comes with a stylus that doubles as a real pen with ink.

There is a magnetic clipboard that attaches to the Yoga Book’s touch keyboard. Users can write notes on the paper which will simultaneously become digital.

The touch keyboard has no physical keys and is attached to the tablet’s main screen via a hinge. The hybrid laptop also sports a 8-megapixel camera on the back and a 2-megapixel shooter on the front. It is backed by a powerful 8500mAh battery.

The Windows variant of Lenovo Yoga Book comes with Windows 10 and Microsoft Office preinstalled. It has a price tag of $549 (Rs 37,200).