There was much press on BlackBerry’s latest handsets DTEK 50 and DTEK 60. But that is not all it is. There is one more device, in fact the last one to feature a full QWERTY keyboard by the company. 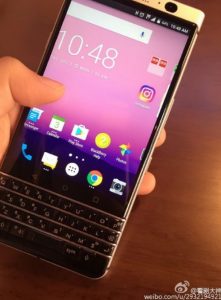 The BlackBerry Mercury will be fully manufactured by the company. Leaked images of the device this week revealed the QWERTY keyboard, but nothing more.

Leaked on Chinese social network Weibo, the device appears to be have a close resemblance to the Priv with keyboard fixed in one place and capacitive navigation buttons.

Last month, BlackBerry CEO John Chen had indeed confirmed that the company was working on an Android device with a physical keyboard. A month before, the Mercury was spotted on benchmarking website Geekbench with the model number BlackBerry BBB100-1.

To run on Android 7.0 Nougat OS, the device is expected to feature a 2GHz Octa-core Qualcomm processor with 3GB RAM and 32GB storage. The 4.5-inch Full HD display phone will have a 18MP rear camera and 8MP front shooter. It could pack a 3,400 mAh battery.

The last two Android-powered devices launched by BlackBerry were the DTEK 50 and DTEK 60, both with premium security features. The mid-range DTEK 50 comes with a 5.2 inch screen with full HD display and is powered by a Snapdragon 617 processor.

The DTEK 60 on the other hand comes with a 5.5 inch quad AMOLED display and is powered by a 820 Snapdragon processor. It has a 21MP rear camera and an 8MP front shooter.

Both the devices were manufactured by Alcatel. The company had announced that it would focus solely on software, while the hardware will be outsourced.