OnePlus 3T is launching tomorrow. An official announcement earlier had revealed the processor and release date. 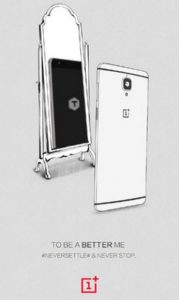 “T-7: The Qualcomm Snapdragon 821 (2.35GHz) is coming your way. Find out more on November 15,” stated the announcement. This is speculated to be the OnePlus 3T which is an upgrade to OnePlus 3.

The upcoming device will reportedly sport an LCD screen and an enhanced 16MP rear camera with a Sony IMX398 sensor. The battery also has received a bump from 3000 mAh to 3300 mAh. Powered by Qualcomm’s Snapdragon 821 processor, the phone is expected to come with 64GB and 128GB internal storage variants.

Under the hood, it had Snapdragon 820 chipset with 6GB RAM and 64GB of internal memory which is non-expandable. The phone runs Android 6.0.1 Marshmallow out of the box.