Levitating devices come in all shapes and sizes nowadays. But Base Forge’s ‘Lightest’ lamp will not only levitate itself, but also levitate our mood.

This lamp does not only float so effortlessly in mid-air, it also changes color thanks to its smartphone app. Users can simply place the light over its base and it’ll levitate automatically. For added effect, it can be spun slightly so that it keeps spinning for hours on end, thanks to the lack of friction, providing some super cool lighting possibilities. 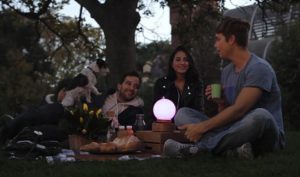 The base comes with its own battery that can last for up to six hours for those long picnics or night outs with friends. How the lamp works is, that it’s powered through induction that’s passed on from the base to the levitating lamp. It’s almost as if it’s wirelessly passing current. The science is pretty neat, and the end result is even neater.

The shade is even detachable, so users can make their own shade and attach it to the levitating dock of the lamp. The illumination can be manipulated to control brightness and also change of color.

“As an architect by training and an industrial designer by profession I’m always involved in cutting edge technologies with clients,” said creator Chris Muscat Azzopardi. “This project of levitating a product was one theme that kept recurring, and when I mixed it with another project we had developed using wireless electricity transfer I was enamoured with the idea of joining the two.”

The levitation bit, which is the only reason why anyone would buy it, is managed by a strong magnet that lies in the wooden base. There’s a slightly smaller magnet on the levitating platform and also four electromagnets to provide stability. The LED light inside is also pretty durable, able to last for up 50,000 hours.

It’s currently a Kickstarter project and can be acquired for $152 for pre-order. It’s a pretty steep price, considering the functionality. But they claim that it’s made of pretty high quality materials. It’s a good mood-setter and a very cool accessory to show off to company.