The new breed of Surfaces is finally upon us. And of course, the biggest take away from the Microsoft event would have been the Surface Studio. Safe to say, it’s the most powerful device that Microsoft has ever built. And it’s coming after every other vendor with all it’s got. But does it have enough performance to back up that $3K+ price tag? Here’s what we are getting for our money’s worth. 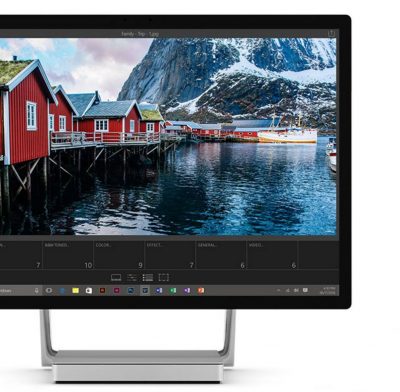 If you are investing in the Surface Studio, it will primarily go to the display. Microsoft has highlighted that the display is the biggest selling point of the new Surface. It’s got a resolution of 4500×3000. That’s 63 percent denser than a 4K display, packed into an ultra-thin 12.5mm display at 28 inches. The screen offers a 4:3 aspect ratio so that the picture is as true to life as possible. So far, that’s one of the best screens on the market right now. What’s better than 4K? Well now we have the answer.

But wait, there’s more too. Because it’s a Surface, it’s got a touchscreen so it’s easier for the user to properly interact with the content that they’re creating. What’s more, the display is pretty flexible. By flexible, we don’t mean bend-able, but better – it’s got hinges that support the screen that can be bent down at an angle up to 20-degrees and let users use the screen as a proper canvas for their illustration needs. Coupled with the Surface Pen, we’ve got perhaps the most convenient creative Suite!

The Surface Studio will come pre-packed with the Surface Dial and the Surface Pen. We’re all aware of the Surface Pen, and it’ll be much appreciated now since it’s got a much wider surface for application. The pen can also be attached to the side of the screen for convenience, so Microsoft scores extra brownie points for the ergonomics.

The Surface Dial is a very interesting new accessory that will come with the Surface Studio. It’s a dial that can be used as a secondary peripheral while designing. It’s compatible with a few apps and allows to control the volume on the Surface Studio, as well as change colors while sketching or even zoom in and out of pictures in applications. We’re not really sure how this will better replace the mouse which was already doing alright with all these functions. But it’s a more dedicated source of control and has its perks. We hope there’s compatibility for more apps too, else this particular controlling device might not last long in its very unique segment.

The Surface’s keyboard and mouse aren’t anything ground-breaking. They look fairly minimal and simple. We really wish that like the display, Microsoft could have made the keyboard and mouse a little more design-friendly with extra customizable keys. But it still isn’t bad and considering Microsoft went with such a flat Apple-like design, they must have figured, ‘if it isn’t broken, why fix it?’

Internally, the Surface is actually quite impressive. But not nearly as impressive as it should be. It’s got the Intel i5 and i7 processors, each on the lower-end and high-end makes respectively. The storage options will range from 1TB to 2TB. Memory extends from 8GB to 32GB and the graphics department will support the higher end variants of the mobile NVIDIA platform, with the base models coming with the GeForce GTX 965M 2GB and the high-end variant coming with the GTX 980M 4GB.

The optics are decent-ish – with a 5MP camera on the front with 1080p recording and another camera at the back with auto-focus. Do they even make cameras for the back of PCs? Well this is new. But we’re guessing it could be for creating graphics out of objects in front of the device or to stalk unsuspecting passers-by. It’ll also feature Windows Hello of course, for camera sign-in.

It might not look like the system doesn’t have any speakers on it. But it comes with a 2.1 stereo set-up. It’s Dolby backed, so it must be pretty good.

The design of the Surface Studio is unlike other all-in-ones out there right now. However, Lenovo did make a similar-looking All-in-one that also had a bend-able screen called the A740. It had a pretty sleek design and Microsoft has pushed the boundaries of that design a little more with this iteration. We wouldn’t be surprised if it drew its inspiration from this system.

It’s a good design regardless, because it gives ample attention to the screen and everything is close enough without needing any extra reaching out. The PC case is so small, it’s barely noticeable. Microsoft has compromised a lot on space, for its sake, even on hardware. But it’s packed the best of what can fit in that tiny module of a PC case. It’s definitely better looking than a Mac and even though they look similar, the extra features on the Surface make it a better choice.

In conclusion, we’ve got a decent contender for the best all-in-one PC out there. Microsoft has entered the game guns blazing. And it’s trying to penetrate a market that’s the most attractive and has the most buyers in abundance – the creatives. We can see these systems being used in various advertising agencies in the future for proper work-station

Where the Studio falls short is in the justification for the hardware-to-price ratio. The base version of the Studio will cost $3000. With that money, it’ll be easier to buy the best desktop-grade performance system at bargain price – or even half that.

Microsoft didn’t need to be stuck with the Skylake Intel processors even now. Kaby Lake would have been a much better way to go. The same goes for the GPU – the M series of the 980 and 965 are capable, but not when push comes to shove. Microsoft could have easily added the GTX 1060 or 1070 even.

If notebooks that are as light and powerful as the new Razor Blade can be, why didn’t Microsoft choose to take the more current and future-proof route? As a result, VR content doesn’t seem like a possibility on this system since these GPUs weren’t made for that in mind as much as the latest crop of NVIDIA GPUs have been. And seeing as the Studio is aimed at creating a lot of visual content, it loses points on being a completely visually-oriented system since Microsoft will be making updates for 3D applications in the future and VR will play a big-role during that time. That gorgeous more-than-4K display deserves some better graphical performance.

There’s also the glaring absence of USB Type-C. It feels like Microsoft just doesn’t want to enter the future-race. USB 3.0 is well and good, but it would be nice to see the Studio stay ahead with the times. It’s already ahead with the type of creative features it offers, so why not make it a complete system and follow that up with hardware?

Actually, that’s what the Studio aims to be. Not a processing power-house or number-pusher. It’s got its own features that it does quite well. Remember how we used to criticize Apple’s systems for being lacking in specs? That didn’t stop people from buying them for making 3D content and visual-design applications. With the Surface Studio, we’re getting a whole lot more than what we’d get if we paid the same for an iMac. And that’s where Microsoft wins.

The Windows OS now has its own PC make. And it’s not unimpressive on any count. It’s got the makings of a properly built, reliable architecture of a CPU with features we have always wished for the PCs of today to have. For the designers, for the architects and for the developers, this is the system they’ll want and one that will justify the pricing. For a first attempt, this isn’t a bad way to enter the segment, although it is the premium segment.

And with its short-comings, Microsoft does have a few things to work on, if it wants to be the very best. But we’ve only just scratched the Surface of what’s now possible on a Personal Computer.