On Tuesday, LeEco made a slew of announcements at an event in San Francisco. The upcoming products also included a new line-up of TVs, a VR headset and a self-driving car.

The LePro 3, which costs $399, is a mid-range phone that runs on Qualcomm Snapdragon 821 processor, alongside 4GB of RAM and 64GB of flash storage. It sports a 5.5-inch display and has a 16MP rear camera and an 8MP shooter on the front.

And with Qualcomm’s Quick Charge 3.0 technology, the device can charge up to 33 percent in 20 minutes. The device is backed by an impressive 4,070 mAh battery. There’s also a fingerprint sensor on the back of the phone, a USB C-to-3.5mm adapter and NFC support.

The second device unveiled was the Le S3 that is powered by a Snapdragon 652 chipset, 3GB of RAM and 32GB of internal memory. The Android device features a 5.5-inch display and a 3,000 mAh battery. The camera specs remain the same as LePro 3. The device will sell for a price tag of $249.

Like other markets where LeEco has successfully launched the devices through flash sales, the company hopes to explore a similar model to ramp up sales. This would be the first time such a model will be seen in the U.S. The flash sale will take place on November 2.

Other LeEco products to watch out for is the uMax85, an 85-inch 4K TV and Super4 X UHD TVs that only support HDR10. The uMax85 features Harman Kardon speakers, Dolby Digital Plus, 4GB of RAM, as well as a 64GB SSD to store your apps. The TV features a total of four HDMI inputs, as well as an optical audio output. 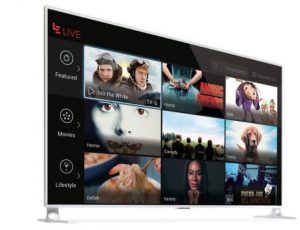 uMax85 is an Android-powered TV and supports both HDR standards