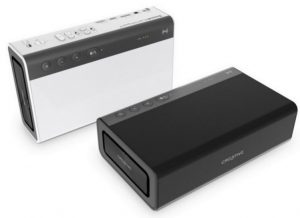 Sound Blaster Roar is available for purchase within 200$.

So how does it stack up with its counterparts? A simple glance will show a bunch of buttons, switches, and ports on the front and back of the speaker. Most of the buttons on the back are for playing music or recording audio when you plug in a micro-SD card.

You can charge Roar via micro-USB, or even faster with the AC adapter cable. It comes with both cables. There’s a full sized USB port which allows you to tap into the Roar’s battery power and charge any device – phone, tablet, ipod – you name and they have it. You can opt-out of Bluetooth and play music via the auxiliary input too.

The built-in 6000mAh battery can be shared between the speaker and any USB device you want to charge.

It’s really neat actually — there are three settings for controlling how easy (or hard) you want to make it for others to connect. You can lock it down so no one can hijack your Bluetooth connection, or you can basically put it into party mode so anyone can connect and crank out tunes.

However, it doesn’t have the best audio quality available. But it packs so many features into a $200 unit when most Bluetooth speakers in that price range only offer speakerphone functionality at best.

To sum it up, in $200, it has a voice recorder, a microSD card reader, a USB digital-to-analog converter (DAC), a smartphone charger, and even a siren.

It also adds a megaphone function that can project your voice, and can also warp your voice to sound like over a dozen creepy characters—and does so while knocking $50 off the price.

Unfortunately, its sound quality with music still doesn’t impress, especially if you are a lover of strong bass, even when you take into account the portable size and weight.

The Bluetooth streaming quality and range, however, is great. You can even make and take phone calls on it using the microphone. NFC is convenient for pairing if you have an Android.

Well, if audio quality is a priority for you, and it likely is when choosing a speaker, consider spending a bit more to get the superior-sounding Braven BRV-X or Bose SoundLink Mini.

If you don’t need all of the crazy features the ‘Roar’ offers and don’t want to spend as much, the Logitech X300 $54.99 at Amazon offers strong performance for less than half the price.