Wacom has long been known to produce pen-enabled tablet products. Since 2013, the company has been making some fully-fledged tablets. Wacom has now introduced a new range of tablets called the MobileStudio Pro and it could be one of the best tablets we’ve seen yet.

There are two variants of this tablet – a 13-inch one and a 16-inch one. And they won’t fall under the run-of-the-mill tablets we’re used to from iPad or any other Android laptop. This one runs Windows 10 and has the specs of a modern-day ultrabook.

Both the variants come with Intel i5 and i7 processors, with the higher-end versions featuring NVIDIA Quadro GPUs on-board. That’s right, they won’t settle for the GTX versions, but the design-optimized Quadro GPUs that haven’t really been known to make an appearance on a portable device just yet. But that’s just exclusive to the 16-inch variant. The 13-inch tablet makes do with Intel’s integrated graphics. But despite the specs, they both promise some high-end performance for serious graphic utility.

Because it’s Wacom, they’ll obviously feature its best stylus pen – a pen that has 8,192 levels of sensitivity. Forget about the Apple Pen or the Surface Book’s stylus, this pen doesn’t even need a battery to run on. Pair that with the stellar hardware – up to 16GB of RAM and up to 4GB of VRAM with up to 512 GB of SSD storage and that could well be the tablet of the year. 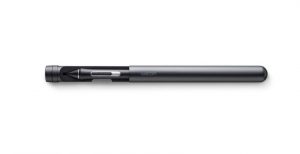 Now, the tablet will run everything that the user can throw at it but there’s even more. It’s 3D ready – meaning it features Intel’s highly acclaimed RealSense camera that can scan the environment – perfect for CAD engineers and designers. Also useful for Virtual Reality and Augmented Reality applications. The tablet is quite unique looking, in a way that it’s not the prettiest tablet we have come across so far. But when it comes to the raw power, that’s more than forgiven.

The display of the tablet is something else – up to 4K resolution in terms of display quality with 96% colour accuracy of Adobe RGB. The screen’s surface also has something special about it too. It’s got a special etched surface that, when used with the stylus, feels like pen on paper. And Wacom, being known for the geniuses they are in this department, have done a great job at making this tablet the best tool for illustrators.

Overall, the tablet has six configurations to choose from. So there will be something for every budget and person. Whether they are hardcore artists or just starting out. Perhaps one of the greatest features of this tablet is that it can still connect to a computer and be used as a secondary display and pen interface.

We are pretty sure there isn’t a tablet out there that offers so many things and offers such great performance. It’s got the computing guts, coupled with artsy brains on the inside. Wacom, take a bow.