Meet Noto, a open-source font family that is a collaboration of five years by Monotype Imaging and Google.

Noto is short for “no more tofu”, meaning no more blank boxes that appear when a website is unable to display text as the font that should render the text isn’t available.

With the new font, you get 800 languages and 100 writing scripts, including letters in multiple serif and sans serif styles, numbers, emoji, symbols and musical notations.

Calling it a daunting project in size and scope, Bob Jung, director of internationalization at Google, said, the two companied “worked hard over the past five years to develop a really good product that solves a problem no one else has taken on before”.

“Our goal for Noto has been to create fonts for our devices, but we’re also very interested in keeping information alive. When it comes to some of these lesser used languages, or even the purely academic or dead languages, we think it’s really important to preserve them. Without the digital capability of Noto, it’s much more difficult to preserve that cultural resource.”

While Google spearheaded the project, it was Massachusetts-based Monotype that conducted the research and designed the characters, writing systems and alphabets. Cultural experts, designers and linguists were brought together for the Noto project. 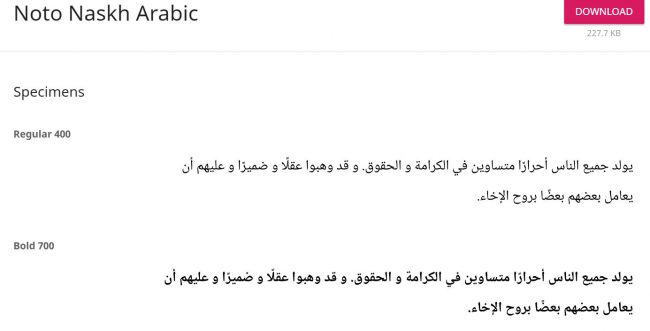 Monotype has been involved with Google Noto since 2011 when Unicode 6.0 was released. “We are passionately dedicated to type and helping to advance the use and adoption of type across many cultures, languages and geographies. We are thrilled to have played such an important role in what has become one of the most significant type projects of all time,” expressed Scott Landers, president and CEO of Monotype.

Google Noto is released under the Open Font License. The font can be downloaded for free on the dedicated website. You can download the entire font family or search by language or region.