We’re just hours away from Google’s much-hyped event in San Francisco. One of the biggest announcements will be the new Pixel and Pixel XL phones. While leaks and rumors have already confirmed many of the features and specifications, the latest from Verizon discloses the three color variants.

According to Verizon, the Pixel and Pixel XL smartphones will be launched in black, white, and newest being blue. The US-based carrier also confirmed the 32GB and 128GB storage versions.

Previous leaks by Canadian carriers Bell and Telus only confirmed the black and white variants of the Pixel device. It was a Reddit user who first shared the news that an order form on Canadian carrier Bell’s website showed off the white variant. Later, Telus leaked images of the two phones in black and white color options. However, with Verizon’s latest leak, we know the lineup also includes a Blue variant.

The Verizon leak comes just a day after a UK retailer posted separate pages for Pixel and Pixel XL smartphones on its website with overview and detailed specifications. Carphone Warehouse (CW) provided credibility to all the previous leaks, confirming the processor make, storage options and camera sensors. 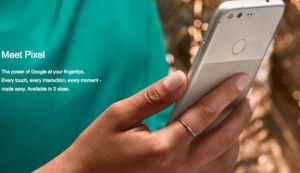 A screen grab of Pixel’s listing on Carphone Warehouse.

Pixel will be available in two sizes – 5 inches and 5.5 inches for the XL model. It is expected to include Qualcomm Snapdragon 820 processor, 4GB of RAM, a 12MP rear-facing camera, and a fingerprint sensor on the back.

Google’s San Francisco launch today will see the unveiling of more than just the Pixel smartphones. The search giant is expected to launch its Google Home smart speaker, Google Chromecast Ultra and Google Wi-Fi smart router. There is also the Daydream VR headset that was introduced at the Google I/O developer conference in May.

In addition to the aforesaid, there is one last rumor that could end up being the biggest announcement of the event. Rumors about the merging of Android and Chrome OS have been around for a while. The new platform codenamed ‘Andromeda’ is expected to bring desktop capabilities of Chrome into Android. Google CEO Sundar Pichai has said in the past that mobile would eventually “blend” with desktop. Well, we will have to wait to know about it. If you are eager to watch the event, Google is live streaming it on YouTube. It starts at 9:00 AM PT.