WhatsApp will now allow you to doodle on your photos. The messaging app on Monday introduced the option to draw on photos and videos, including emoji. 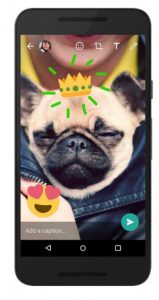 WhatsApp allows to customize and enhance photos and videos.

The feature was being tested on Beta last month and now is made public for all Android devices. The iOS version will soon follow.

“Today we’re introducing new ways to customize and enhance the photos and videos you share with friends and family around the world. With WhatsApp’s new camera features, you can now write or draw on photos and videos, as well as add emoji to express yourself,” stated a blog post.

WhatsApp users will be able to see the new editing tools every time they capture a new photo or share one that is already on phone. You can draw on the picture, add your favorite emoji, text and even change color and font style.

Another major update in the latest release is the camera support for front-facing flash. When taking pictures in low light and at night, WhatsApp camera will brighten up your screen and improve the quality of photo. The messaging app also added a convenient zooming feature for recording videos. Users can now slide finger up and down to zoom in and out.

It is no surprise that Facebook has borrowed another key feature of Snapchat to its messaging app. The drawing on top of images and videos is extremely popular among Snapchat users. Having said that, the doodling and emoji editing tools are now part of most messaging apps available on Android or iOS platforms.

Just last week Facebook was reported to be testing another Snapchat-like feature ‘Messenger Day’ which lets users post illustrated photos and videos that disappear after a day.

Messenger Day is built into Facebook Messenger rather than Facebook’s main mobile app and appears at the top of the conversation list in Messenger. “We know that people come to Messenger to share everyday moments with friends and family,” a spokesperson told TechCrunch. “In Poland we are running a small test of new ways for people to share those updates visually. We have nothing more to announce at this time.”

Earlier in August, Facebook introduced Instagram Stories, a clear rip of Snapchat’s Stories feature. Like Snapchat Stories, Instagram Stories lets users gather multiple photos or videos into a single clip that can then be shared with friends. They can illustrate the final video, which will disappear after 24 hours.