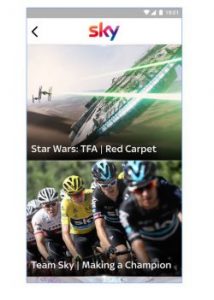 A screen grab of the app posted on Google Play store.

The Sky VR app – available on both iOS and Android – can be used with a Google Cardboard headset, Samsung Gear VR and Oculus Rift headsets. The app is currently restricted to those in
UK, Italy, Germany, Austria, Australia, New Zealand, France and the United States.

“Interest in VR content is building, generating more excitement every day. We are just at the beginning of our VR journey at Sky, launching Sky VR studios earlier this year and we are already breaking new ground. Now comes the creative challenge of deploying this immersive experience with engaging story-telling,” said Gary Davey, Managing Director, Content at Sky.

To coincide with the app’s launch, Sky is also revealing two brand new VR experiences. Sky will also soon commission a series of high-end VR experiences, under the Sky VR Exclusives label. Produced both in-house by the Sky VR Studios and with third-party partners, the series will build on the commitment to create VR content.

Sky has been expanding its VR interests over recent years. Earlier, in March, Sky had unveiled a dedicated VR studio that will produce immersive experiences around sports, movies, news and entertainment. Notably, in 2013, the company invested in Jaunt, a US-based firm pioneering cinematic virtual reality.

As a promotional exercise, Sky will be giving away thousands of Google Cardboards to people visiting Sky Backstage at The O2 in London from October 20.