Let’s get real now. The most ridiculously powerful computer isn’t a desktop. It’s now a notebook. With GPU and CPU capabilities skyrocketing on the mobile desktop front, what makes notebooks the more powerful counterpart is that they can do everything a desktop can, anywhere. And Asus’s new GL702VM is a testament to that. 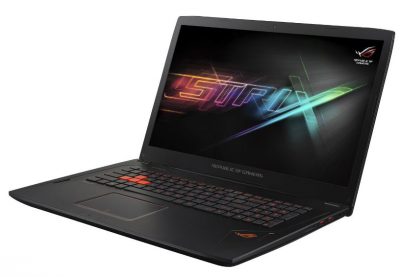 Asus is one of the few manufacturers out there serious about making devices that perform, like its latest – the ROG Strix GL702VM. This is a 17.3-inch VR-ready gaming powerhouse that can put up with anything today’s games throw at it.

Powered with Skylake’s architecture on the processing architecture front and Nvidia’s GTX 1060 with 6GB of GDDR5 memory, it’s also one of the few models to consist of the reputed Strix and ROG branding, which is something most enthusiasts will readily rejoice with. The RAM on this machine is a full-blown 16GB DDR4-2133 configuration. It also come with a 1TB hard drive.

The display is a 1080p screen with G-Sync support. And connectivity options are in abundance with WiFi, Bluetooth, USB 3 Ports, a Thunderbolt Type-C port, Mini-display port and HDMI port all in attendance. One of the few gaming oriented laptops that doesn’t come with a mechanical keyboard, Asus is confident that its keyboard still has plenty of travel, with backlighting and highlights for WASD keys.

Granted, the 1060 isn’t exactly the best of Nvidia, but the GTX 1080 would be an overkill on a machine like this. For a full HD experience and very decent VR-ing, this model will not disappoint. The laptop comes at a price of $1400 and seems like a viable option if someone’s in the market looking for a good gaming PC for the long haul. It’s also lighter than most gaming laptops, thanks to the removal of mechanical keys and a slim profile. The Core i7 is Skylake, but still proves it’s more than enough for powering through those FallOut and Battlefield sessions.

Compare these specs to a regular performance PC and people probably would have a hard time trying to choose the latter. The GL702VM is a good departure from its predecessor and is pretty deserving of that Strix ROG tag.

Probably the only negative here is the lack of any proper ventilation, since the shell does seem pretty closed. Apart from that, we have a winner here.