The desktop PCs, unveiled recently at the IFA 2016, runs on Windows 10 and is engineered to power “entertainment and productivity”. 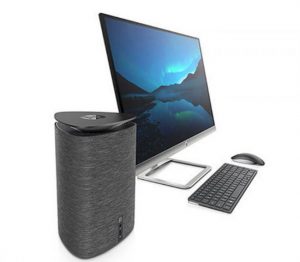 The HP Pavilion Wave features a 360-degree design that is smaller than traditional tower PCs and has a triangular design that houses three main zones for components. It has built-in speakers and microphone, 6th Generation Intel Core i7 quad-core desktop processors, storage up to 1TB SDD5 or a 2TB HDD5 and and up to 16GB of DDR4 system memory.

HP also released the Elite Slice, its smallest desktop, aimed at the commercial buyer. The company underlines that Elite Slice was designed for communications and collaboration. It is reportedly the first modular commercial desktop with cable-less connectivity and enables customers to build the desktop of their choice.

This is the first commercial desktop powered from a display via only one USB 3.1 Type-C cable. The display is equipped with integrated wireless charging and USB Type-C.

HP claims the Elite Slice was designed to modernize the workplace and cater to the changing workforce.