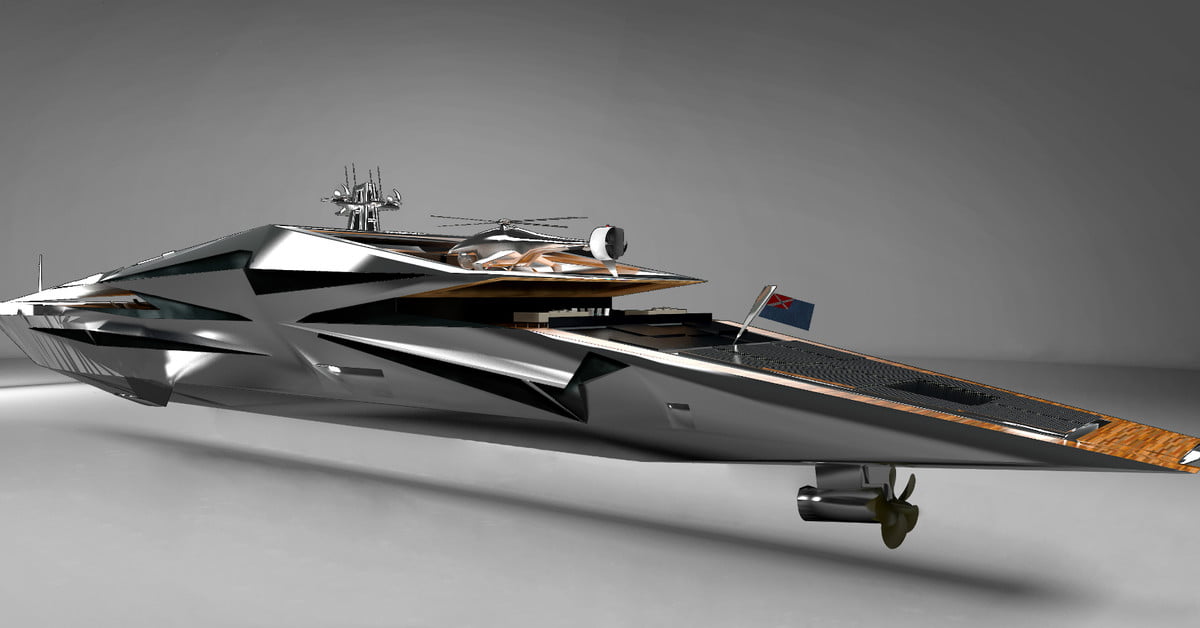 If at first glance, MY Roswell makes you think “spaceship,” Monaco-based superyacht designer George Lucian will be pleased. Lucian hints broadly at his latest design’s inspiration, and the source of its name, when he kicks off the ship’s announcement with the question: “Is this yacht coming from another dimension.”

Lucian’s design goal was to create “an iconic, worldwide recognizable yacht inspired from the future.” Keeping in mind that the Roswell is a superyacht concept, not an actual vessel under contract and construction, Lucian’s design doesn’t incorporate any alien technology. The Roswell’s design elements and operational technologies are already in use on superyachts plying the seas and oceans.

Lucian provides only general measurements and descriptions of the superyacht’s length, structural components, propulsion mechanics, and passenger and crew capacities. Full specifications are unavailable. Should a buyer give Lucian a consignment to build the Roswell, details would certainly change to suit the owner.

The Roswell’s aluminum 65-meter hull — about 213 feet — easily places it in the superyacht class, which is defined by international consensus to include yachts that are 30 meters or longer.

Lucian wants the yacht to be stealthy, not just in design, but also in operation, which means it must be quiet. Therefore, the designer specified fully electric running capability. To avoid cranking up the noisy onboard generators until out of port, as much deck surface as possible was covered with solar panels to capture energy.

Electric motors won’t be the only power source. The Roswell will also have two diesel-electric engines for longer cruises. No power output or cruising range is available.

The designer’s wish for the Roswell while in port, however, abandons any attempt of stealthiness. “Unlike its radar footprint, its presence in any harbor will for sure be anything else but discrete, ” according to Lucian.

The Roswell’s amenity list includes a large outdoor covered living area on the main deck bow, a beam-width swimming pool, lounge, and dining area. Large glass doors between the main deck salon, bow deck, and the yacht’s stern deck are designed to give passengers the sense of traveling in a huge open loft. The upper deck would house the bridge, a sky lounge, and a helicopter platform.

Lucian’s design concept nominally accommodates 12 guests and 12 crew members, although the final positions and layout of the cabins and quarters will be determined by the designer and the buyer.

The MY Roswell is not the designer’s first superyacht concept. Other concepts include a mega sailing yacht, “SY Project Origami,” and “MY Dare to Dream,” a superyacht airship carrier.

And about the Roswell’s name.

No one denies a balloon crashed on a ranch in Roswell, New Mexico, in early summer 1947. Everything else about the balloon has been in contention ever since.

Some claim the accident involved a UFO the government has been covering up for 71 years. It didn’t help matters when, after initially stating the crash involved a weather balloon, the U. S. military admitted in the mid-1990s that the structure was a nuclear test surveillance balloon used in the super-secret Project Mogul.

The Roswell controversy continues to inspire books, films, and now, a 65-meter superyacht.