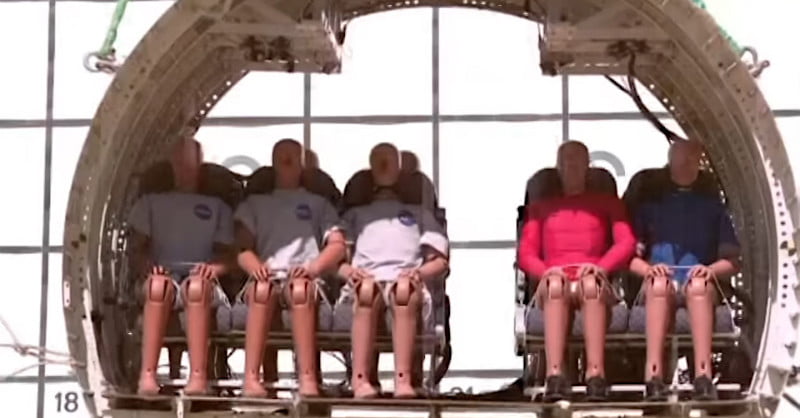 NASA’s Langley Research Center in Hampton, Virginia recently offered a fascinating peek at its work to make aviation safer for us all, from passengers in airplanes to astronauts in space capsules.

A video posted on YouTube explains how the team’s work “ranges from next-generation aircraft to water-impact tests that evaluate the splashdown of Orion astronaut crew capsules returning from space.”

Many of the experiments involve the use of crash-test dummies, similar to the ones used by car safety designers working on ways to improve the protection of a vehicle’s occupants in the event of a collision.

NASA’s dummies are packed with sensors that provide engineers with a slew of data from each impact test.

With crash scenarios aplenty, the video clips may not offer the best viewing experience for nervous fliers, but for those interested in the team’s work, the brief insight is sure to prove fascinating.

“Everything that you want to know about injury occurs anywhere from one-tenth to four-tenths of a second [during impact],” explains Martin Annett, a structural impact dynamics engineer at the Langley Research Center. “We have to be able to capture a lot of data within that time frame.”

Annett says that developments in technology mean the instrumentation that records the data “has gotten a lot smaller — you can now put a suite of sensors just in the back of the head and then the data will be stored on a laptop. We can then take a look at that data, evaluate that against injury criteria, [and]compute different injury criteria.”

The engineer says that when it comes to, say, astronauts, the team can use the data to improve the design of suits and helmets. The latter, for example, places extra weight on the neck and upper body, so keeping helmets light and properly balanced is essential to reducing the chances of injury if an impact occurs at any stage during a mission, particularly when the astronauts return to Earth.

One of the clips shows the cross-section of a plane fuselage — complete with the sensor-laden dummy passengers — hitting the ground with great force following a vertical drop. Annett describes the importance of energy-absorbing seats in such a scenario, with tests allowing the team to learn about the likely effect of such an impact on humans.

The dummies get battered every which way, but the ongoing research is leading to better designs across the aviation industry, for which anyone who ever leaves the ground in a flying machine (or space capsule) will surely be grateful.

Updated on April 9 with information about the automotive crash test dummy report.