Researchers can now create 3D-printed structures made entirely of liquid 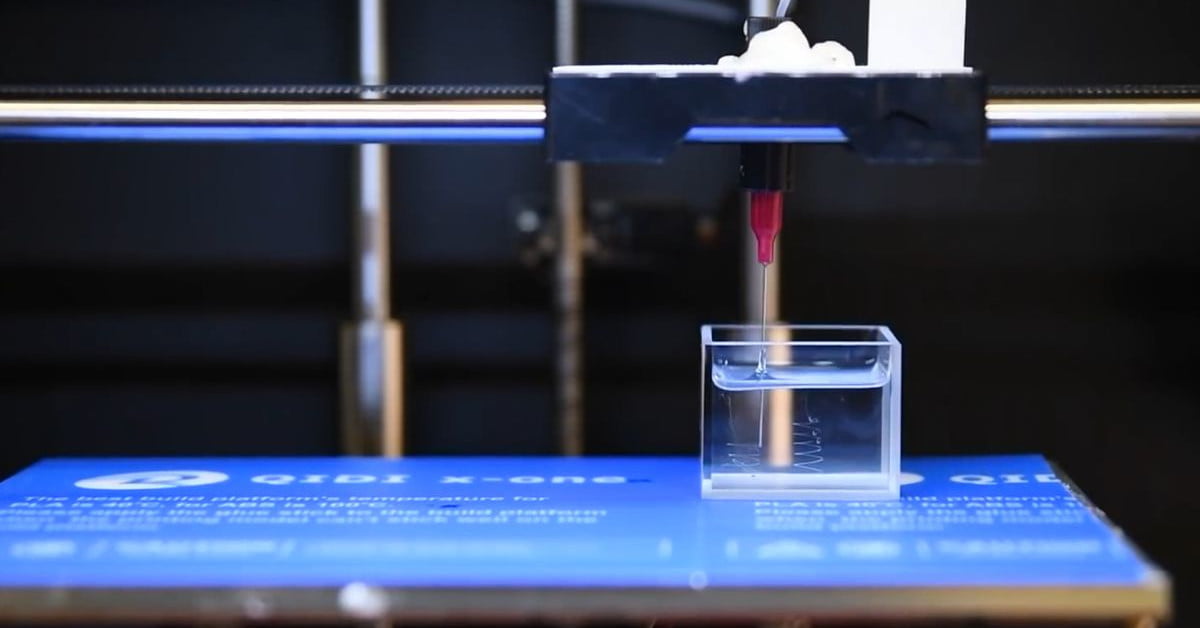 Scientists at Berkeley Lab, in conjunction with the Department of Energy, have devised a way to construct 3D structures completely made from liquid. They used a modified 3D printer to inject tiny streams of water, some as small as one millimeter in diameter, into silicone oil to sculpt tubes of liquid within another liquid.

This technique could be used for liquid electronics and to create flexible devices. Visiting faculty scientist Tom Russell said, “It’s a new class of material that can reconfigure itself, and it has the potential to be customized into liquid reaction vessels for many uses, from chemical synthesis to ion transport to catalysis.”

As New Atlas explains, the water doesn’t disperse into droplets when it’s injected, due to a nanoscale “surfactant” coated inside the injecting tubes, which surrounds the water, reduces surface tension, and separates the water from the silicone oil.

A “nanoparticle supersoap” comprised of gold nanoparticles and binding polymers forms around the water threads and locks the structures into place. It’s like a protective flexible glass sheath shrunk down to a molecular level. The scientists created a number of different structures, some of them several meters in length.

The team modified a regular 3D printer so it could extrude liquid through a syringe. The printer could then insert the needle into the oil and inject the water streams into a programmed pattern.

“We can squeeze liquid from a needle, and place threads of water anywhere we want in three dimensions,” said Forth. “We can also ping the material with an external force, which momentarily breaks the supersoap’s stability and changes the shape of the water threads. The structures are endlessly reconfigurable.”

The technology may also lead to fabrication of complex coatings with specific magnetic properties, or even electronics that can repair themselves.

Funded by the Department of Energy’s Office of Science, Russell developed the process with researcher Joe Forth, and the results of their findings were published in March in the journal Advanced Materials.