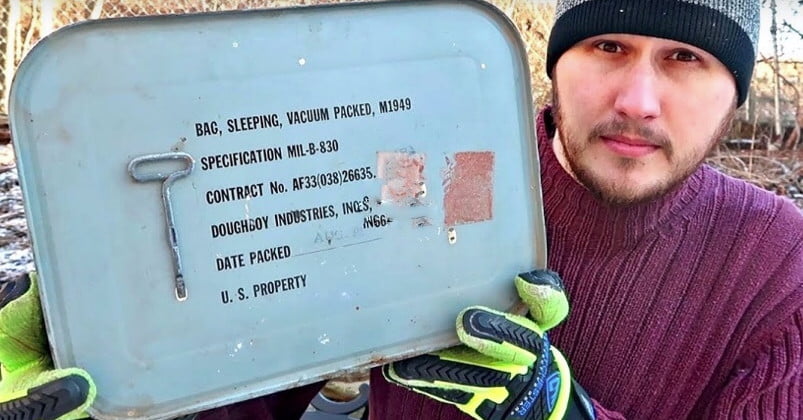 It’s not often that you get to watch a vintage piece of outdoor gear — issued by the U.S. military no less — unearthed on the internet. Recently, YouTube personality Taras Kulakov (aka the Crazy Russian), posted a video of himself unpacking a “sleeping bag in a can” that was vacuum sealed in 1952. As you see in the video above, the bag resembles modern versions in many ways, although we’ve certainly come a long way in terms of construction materials, packability, and design.

The front of the can indicates that its model number is M1949. That particular model was a mummy-style bag — complete with a hood — that was designed for use in mountainous and arctic conditions. It featured goose down insulation and heavy-duty zippers; and could be paired with a waterproof outer shell to protect it, and the soldier, from excess moisture.

This model was probably intended for use by military personnel who were taking part in the Korean War, where harsh winters required a warm sleeping bag. At the time, there was no such thing as hydrophobic down, which is commonly used as an insulator in today’s sleeping bags and jackets. To prevent the bag from getting wet while in storage or transit, it was sealed inside the metal can, probably with the intention of it being opened and used within a matter of months. The can was equipped with a metal key that could remove the outer seal, just like opening a can of sardines.

The M1949 sleeping bag came in two sizes, medium, and large. Judging from the looks of the one that Kulakov purchased off eBay, he must have received the smaller size. The Russian can barely squeeze inside the bag and its hood isn’t quite large enough to fit over his head.

Thankfully, the outdoor industry has come a long way since 1952. In addition to using water-resistant down, today’s sleeping bags are made from technical fabrics that are warm, highly breathable, and dry quickly. They also weigh far less and offer better temperature ratings, while packing down to a small size. Still, if you want to add a vintage sleeping bag to your collection, the M1949 is for sale online for $60.