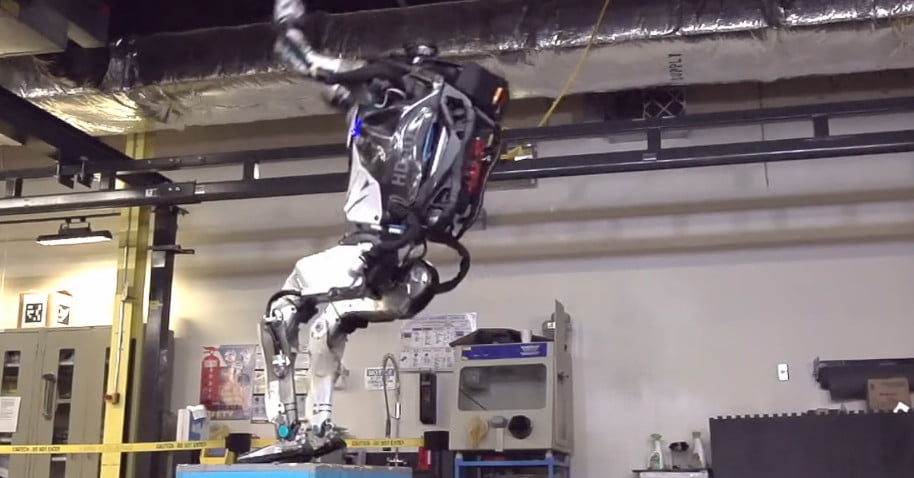 Just a few months ago, Boston Dynamics’ Atlas robot was making a bit of a fool of itself, losing its way on stage in front of an expectant audience before tripping and landing in a heap.

Oh, how we laughed. “The robot apocalypse is a ways off,” we scoffed before taking another look at that hilarious compilation video where lots more robots make themselves look a bit silly.

But then Boston Dynamics posted another video on Thursday, November 16. And we’re not laughing anymore.

Titled, “What’s New, Atlas?” the one-minute sequence begins with the humanoid robot leaping with incredible ease onto a series of blocks of various heights. On the final platform, Atlas performs an impressive 180-degree turn before — and this is the chilling part — executing a spectacular and perfect backflip. Let’s say that again: A spectacular and perfect backflip.

It’s astonishing and horrifying in equal measure, for it now seems only step one away from performing bone-shattering karate kicks, and perhaps just two steps from the robot takeover that deep down we all fear.

The backflip is remarkable on so many levels, not least because Atlas stands at 5 feet 9 inches and weighs 180 pounds. Indeed, the sight of this robot leaping head over rump is certain to leave you wondering if there might be a diminutive Olympic gymnast pulling all the moves from right inside the metal contraption.

Boston Dynamics‘ team of engineers still has to perfect the flip, however, as the end of the video shows Atlas failing to nail it, with amusing consequences.

Still, it’s a remarkable accomplishment, and while we don’t yet see a use for a backflipping robot, the acrobatic leap highlights the technology’s extraordinary ability to achieve great agility, balance, and control. Atlas can already move with ease across a range of terrains using its built-in Lidar and stereo sensors, and even get back up by itself if it falls down, so it appears to be heading toward an endless range of applications.

This latest video from Boston Dynamics comes just days after it posted another one highlighting the latest version of its dog-like SpotMini robot. It shows a super-agile machine bounding up to the camera before pausing to “look” into the lens with its head or stump or whatever you’d like to call it. The revamped SpotMini no longer sports the creepy retractable arm that allowed it to carry out a number of tasks, and we’re now waiting to learn more from Boston Dynamics about what plans it has for the robot.

As for Atlas, we dare not speculate as to what the Massachusetts-based team will have it doing next. But when the video shows up, just make sure you’re close to a sofa in case you need to hide behind it.