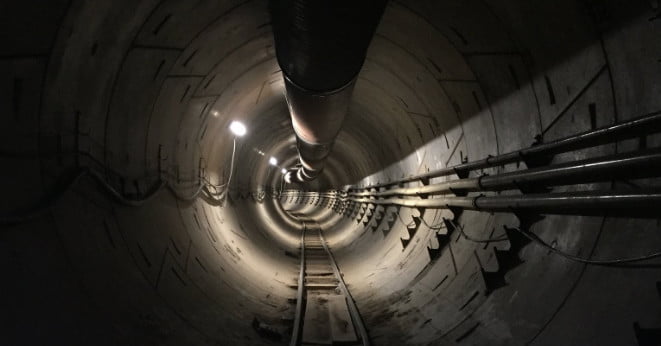 It’s impossible to say if Musk’s ambitious plan will ever become a fully fledged system, but the Boring Company is certainly making progress.

Yes, it’s definitely a tunnel. Elon Musk has just posted the very first photo of a tunnel dug by his Boring Company beneath the streets of Los Angeles as the billionaire entrepreneur goes after his dream of building a subterranean — and speedy — transportation system to help reduce traffic congestion on the busy streets above.

Snapped over the weekend, the image shows something far beyond a simple muddy hole that some of you may have been expecting to see. Rather, it’s clear the team has been doing some serious work on its debut tunnel, fully building out the section with all the necessary bells and whistles.

Musk, a man who certainly isn’t shy about championing grand ideas, first mentioned his futuristic boring plan last year, one that apparently came to him while stuck in his car on a gridlocked freeway.

“Traffic is driving me nuts,” he tweeted in December, 2016. “Am going to build a tunnel boring machine and just start digging…” At the time, no one knew what on earth he was talking about. They do now.

The project, if it’s carried through to completion, will involve building a sprawling network of tunnels criss-crossing the city. Vehicles would be carried through the tunnels aboard track-based electric sleds at speeds of up to 150 mph. A vehicle and its occupants would be lowered from street level onto the sled, while cyclists and pedestrians would use the system by stepping into large pods available for public use. The sleds would switch from the main tunnel to side tunnels to exit and enter the main artery in order to keep the system moving. “This is a big difference compared to subways that stop at every stop, whether you’re getting off or not,” Musk said.

On his Instagram page where he posted the tunnel photo, Musk said the Boring Company‘s first route will go “roughly parallel” to Interstate 405 from Los Angeles international airport to Route 101, “with on/off ramps every mile or so.” Right now the tunnel is 500 feet long (152 meters), though it should reach around two miles (3.2 km) within about four months.

Musk’s partly completed tunnel confirms his determination to make the project happen, though those stuck in gridlock on a daily basis in L.A. will have to wait years for a usable network to evolve, if it ever does. Indeed, to build a truly effective system is going to require not only huge sums of money, but also years of disruptive construction work across the city, leaving Musk having to persuade the authorities that the project really is worth pursuing. This initial tunnel is seen as a test bed for the grander plan.