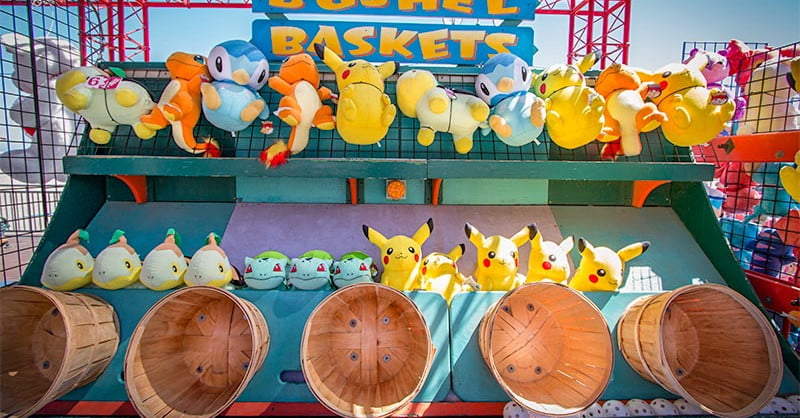 The science behind common carnival games reveals why you’ll never win in the long run.

Ex-NASA scientist and prolific inventor Mark Rober seems like a fun guy. He made a snowball machine gun, constructed a giant Nerf launcher, and even built a dartboard where it’s impossible to miss the bullseye.

For his latest adventure, he traveled to the Santa Cruz Beach Boardwalk amusement park to explain why you can never win the giant stuffed panda at the ring toss, even if you end up spending your life savings. Most carnival games seem quite simple, some even look ridiculously easy, but the creators have science on their side that ensures that you’ll end up shelling out many times what the prizes are actually worth before winning – that is, if you manage to win at all.

The basketball toss is one example. Even if you’ve got a killer three-point shot, you’ll likely come up short at the carnival. That’s because the rims are 11 feet high, rather than the regulation 10 feet. A regulation three-point line is 24 feet out, but at the carnival you’re shooting from 28. Even the back of the attraction is draped with a slanted tarp, to make the basket appear closer than it really is.

“Which is subtle,” Rober explains. “But if you have a deadly three-pointer locked into your muscle memory, you will tend to miss short, which is exactly what we saw a bunch.”

Rober enlisted the help of an army of churro-fueled volunteers to track each game over the course of a full day to see how many people played, and how many actually won a prize. The results are hardly surprising, but it highlights how much money these attractions bring in. Rober estimates the amount at $20,000 per day, just from the carnival games alone.

There are many factors that skew your observations, making the games seem easier than they are. For instance, the beer pong table is slanted, making the balls bounce in a different direction that you’re used to. The milk bottles are weighted differently than normal bottles, making them harder to knock down than you would expect.

In addition to basic physics, the carnival operators have math on their side. For a one-dollar game that has a 10 percent chance of winning, you’ll drop ten bucks (on average) before scoring that pink teddy bear. A pink teddy bear that cost the carnival two dollars.

The entire video is entertaining; Rober even highlights one game that’s actually a test of skill, which you can win every time after a little bit of practice. There’s a catch, though, so you won’t be impressing your date any time soon. Maybe you can impress them on the Ferris wheel waterslide instead?