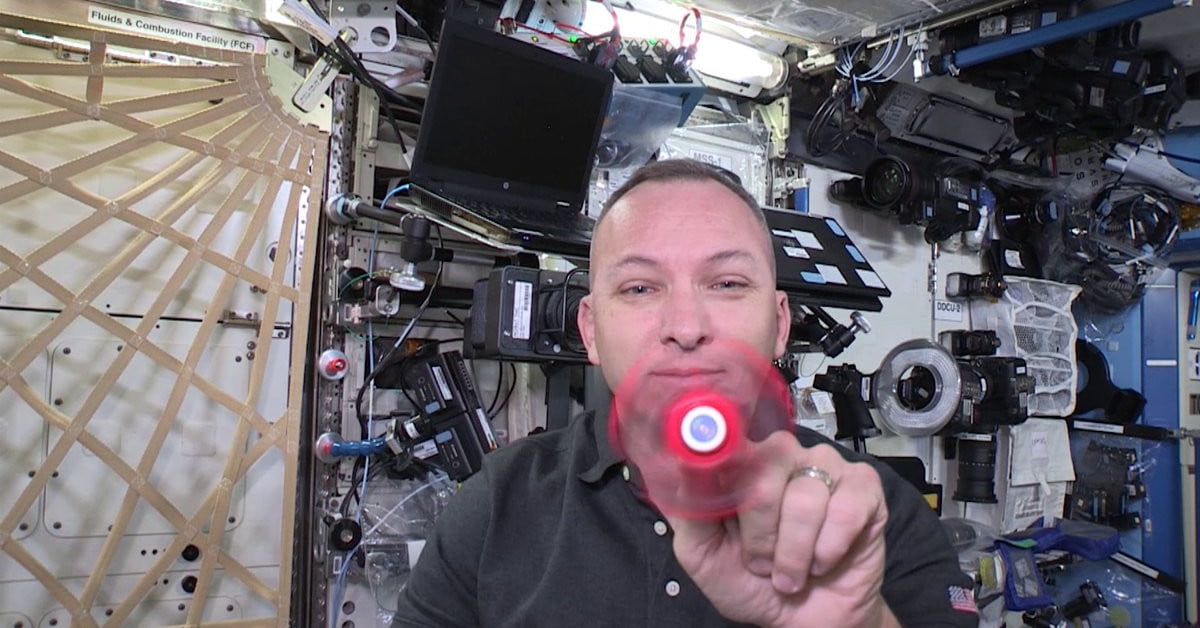 Working in a weightless environment provides its own set of unique challenges, as this video demonstrates.

What happens when you combine a NASA fidget spinner with a nearly weightless environment? Wacky hijinks, of course. Astronaut Randy Bresnik took time out from capturing pictures of the Earth and taking selfies during spacewalks to share a video on Twitter. The clip shows the crew of the International Space Station enjoying themselves with a fidget spinner. “A fidget spinner in space! How long does it spin? I’m not sure, but it’s a great way to experiment with Newton’s laws of motion!” he wrote.

Grabbing hold of the spinner allows the astronauts to spin at a speed relative to their mass. That’s why even using a simple tool such as a screwdriver can be difficult in a weightless environment if you don’t have something to anchor yourself down to.

A fidget spinner in space! How long does it spin? I&#39;m not sure, but it’s a great way to experiment with Newton’s laws of motion! pic.twitter.com/5xIJDs2544

If you’re not following Bresnik, aka @AstroKIomrade on Twitter, you’re missing out on some of the most spectacular photographs of our planet and the ISS you’ll ever see.

When they’re not playing with children’s toys, the crew is hard at work performing experiments, maintaining the station, and transferring cargo. The latest mission to the ISS launched a few days ago, set to deliver almost three tons of fuel, food, and supplies to the station. You can experience life aboard the ISS for yourself with this free virtual reality app.

The ISS is actually visible from Earth, and it’s the third-brightest object in the sky and fairly easy to see with the naked eye. It looks like a very high, very fast-moving plane. The space station completes nearly 16 orbits of the Earth per day, and NASA has eve set up a Spot the Station website where you can find a viewing spot in your area.

The ISS can’t be seen during the day and is only visible during the morning or evening hours, when it’s reflecting light from the sun. Depending on the orbit, you may be able to see the space station several times a week or only once or twice per month. You can set up email or text alerts at the site to notify you when a viewing opportunity is coming up.

If you’d like to snag your very own NASA fidget spinner, they’re available at the NASA store for $6.