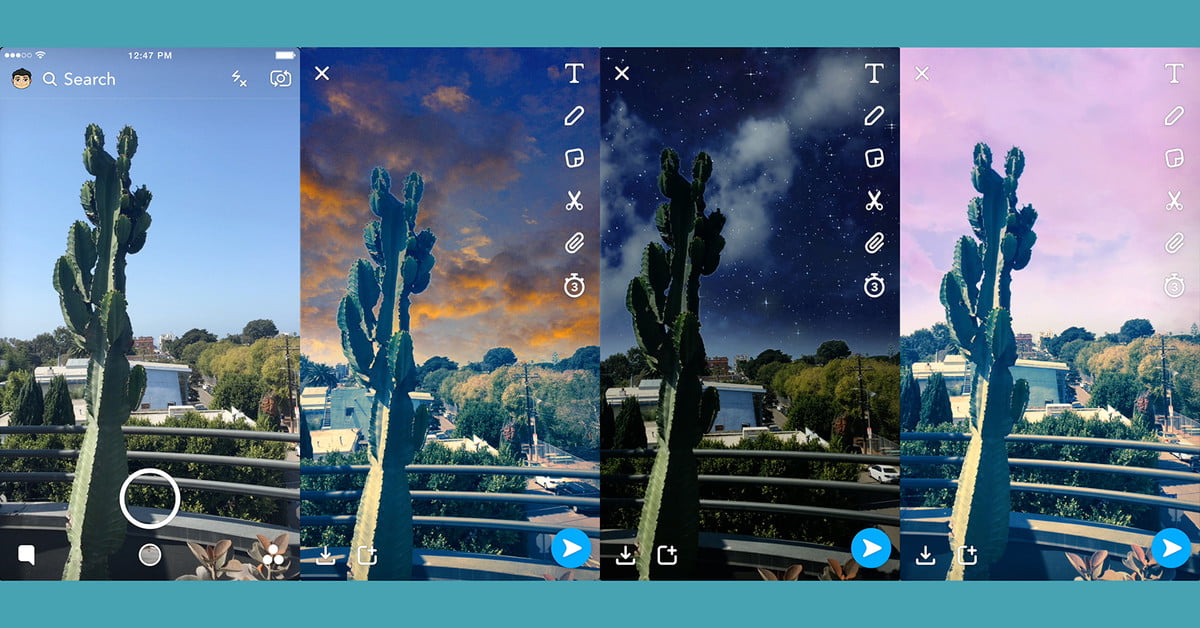 Snapchat isn’t the first to consider switching out boring skies — but its new app might be the simplest way to swap skies yet.

Snapchat is reaching for the sky — err, make that replacing the sky. The social media app has launched a new tool that allows users to swap the sky in their photo for an entirely different one, trading clouds for stars, sunsets, or even rainbows. The Snapchat sky filters update for both iOS and Android began rolling out on Monday, September 25, on the eve of Snap Inc.’s sixth anniversary.

Snapchat will now automatically recognize when the photo contains a sky and include sky filter options inside the filter carousel. No sky in the photo means no filters to sift through. The filter options rotate daily, but Snapchat says the option to add in a starry night, stormy clouds, sunset, rainbow, and more are part of the new feature.

After taking a photo while in Snapchat’s camera mode, just swipe to the right to bring up the different filter options. If the program determines that there’s a sky in the image, sky filters will come up under options, allowing users to swipe to choose which option to apply to the image.

The idea of replacing the sky in a photo isn’t anything new — Adobe has already demonstrated a sneak peek of an upcoming program for replacing the sky, aptly named Sky Replace. Snapchat’s latest update, however, brings the feature not only to a mobile platform, but makes the edit as simple as a swipe, no manual clipping of the sky required.

The feature joins a list of more than 25 updates that the social media platform has added over the last year — a list the company is looking back at while celebrating its sixth anniversary. September also marks one year since Snapchat rebranded to Snap Inc., launched its Spectacles camera glasses, and later went public on the New York Stock Exchange.

The new sky filters join the option of adding a web link inside snaps, which arrived on the platform with Backdrops in July. Unlike the sky filters, Backdrops requires users to use their finger to outline objects that shouldn’t be part of the pattern.

The summer also brought Snap Maps, which allows users to share and see Snap Stories nearby if location sharing is switched on.