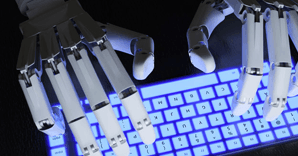 The rise of artificial intelligence in journalism brings up many questions about the future of reporting.

Robots are taking our jobs, no doubt about it. Just in the past year we’ve seen barista robots, fast-food robots, pizza delivery robots, and even a robot conducting a symphony orchestra. But robots can’t replace journalists, right? The dogged reporters, members of the vaunted Fourth Estate, the men and women who bring us the news stories we read every day?

Think again. It’s happening, and odds are that you’ve been reading stories created by artificial intelligence in local and world news already.

A year ago, the Washington Post introduced Heliograf, an in-house program that automatically generates short reports for their live blog. It was first used during the Rio Olympics to provide information such as the results of medal events for services like Alexa. At that time Sam Han, engineering director of data science, said, “The next challenge is to broaden the subjects covered, deepen the kind of analysis possible and identify potential stories for our newsroom.”

It looks like that day has arrived. Over the past year, the Post has published 850 stories from Heliograf, expanding its reach to include reporting on subject like congressional races and high-school football games.

Other outlets like USA Today and the Associated Press have also begun to rely on automated software to create content for readers. Executives are quick to point out that the AI is not meant to replace reporters, but instead allow them extra time to develop and relate more important and relevant stories. “Heliograf will free up Post reporters and editors to add analysis, color from the scene and real insight to stories in ways only they can,” said Jeremy Gilbert, director of strategic initiatives at the Post.

Not to mention the fact that machines don’t make typos and provide more accurate reporting. As Francesco Marconi, AP’s strategy manager put it, “In the case of automated financial news coverage by AP, the error rate in the copy decreased even as the volume of the output increased more than tenfold.”

A few years ago, the site Deadspin speculated that a robot had written a story about a college baseball game, citing the fact that they had “buried the lede” by not mentioning the pitcher had thrown a perfect game until the end of the story. A company called Natural Science rose to the challenge and, using only the box score, produced a better recap of the game than the human reporter had.

What this means for the future of reporting is an open question. Many of today’s biggest names in journalism got their start covering local news or high school sports. In the end, it all comes down to ad revenue. Although the Post can appraise the clicks and pageviews Heliograf generates, evaluating how much it impacts the bottom line is a more difficult task. In any event, it seems like reporters and robots will be working side-by-side for the foreseeable future.