Samsung had released a string of mid-range handsets recently that were only available in China. The C-range of smartphones by Samsung enjoyed decent popularity. Now, Samsung is coming out with the new C5 Pro which will also be available outside China. Here’s what it is all about. 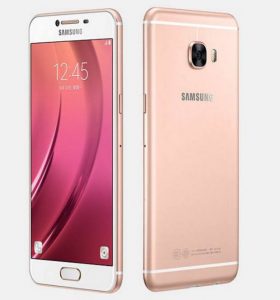 The phone, now listed on the company’s website, does not mention the price. But it should come across to buyers at a cost of 2499 Yuan, which is roughly $362. It will be available in the following colors – Pink Gold, Arctic Blue and Gold. The phone features a 5.2-inch display with an FHD resolution Super AMOLED display. It further comes with the Snapdragon 628 2.2GHz octa-core SoC and Adreno 506, coupled with 4GB of RAM and 64GB of internal storage with an expandable memory slot for support up to 256GB. It will be powered by a 2,600mAh battery and also come with Marshmallow 6.0.1, which hopefully should make the jump to Nougat soon enough after launch.

On the optics front, GSMArena confirms that 16MP sensors will be featured on both the front and the back of the phone with apertures of f/1.9, making for good quality photos either way. They can also record in full HD at 30fps. The phone also has a fingerprint scanner that is tucked underneath the home button, which should work for Samsung Pay, which will be among the list of pre-installed apps which will make an appearance on the phone.

Being geared towards the mid-range market, the phone certainly packs quite the metaphorical punch in terms of looks, being a unibody metal build with rounded corners. The smartphone is LTE enabled, comes with a USB Type-C port, NFC and other usual sensors found on smartphones. Looking at the phone itself, it doesn’t look like a mid-ranger at all. The C5 Pro will be released on March 16 all over the world. The company aims to make some quick money before the launch of its new flagship, the Galaxy S8, which should be leaps and bounds ahead of this phone. Samsung does however, have a bad habit of not looking after their mid-range line-up of devices in terms of software updates. Let’s hope that with the launch of the C5 Pro, this changes soon.

The C5 Pro is the little brother to the C7 Pro which was released a couple of months back. The resemblance is there, and looking at the spec-sheet, it seems like this one will be quite a performer as well.