When a phone that is as hyped as the Samsung Galaxy S8 is, nothing is sacred anymore. With back-to-back leaks, nothing can be left to imagination. In less than a month, the new phone will be here, but users can already decide whether to buy it or not because they can now see the phone in its full glory. 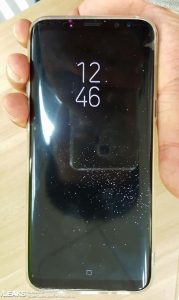 Someone had gone ahead recently and posted a photo on Slashleaks that showed the Galaxy S8 from every possible angle. In the leak, it is shown to be inside a case, but as it is a hard-plastic case, it doesn’t really hide the important bits of the phone. The leaks confirm the presence of a huge Super AMOLED screen with curved sides and rounded corners (like the LG G6). According to the images, the front of the phone has a lot more sensors than we are used to seeing on a smartphone. One of them is believed to be the iris scanner that was in the Note 7.

The new on-screen home button is also revealed in the leaks, as reported by The Verge. This shows exactly how small the top and bottom bezels have become, just by placing the home button atop the screen itself now. The back of the phone is where the fingerprint sensor seems to be going, apparently, as there is now a sensor that is almost as big as the camera’s is, on the back of the phone. This seems to be a different approach that Samsung is taking now, being more of a traditional spot for placing the fingerprint reader. This also confirms that the screen of the phone will not have a fingerprint sensing layer as was earlier rumoured.

CNet has noted down some other features that look apparent in the leaks, such as: a headphone jack (which will be much-appreciated); maybe a USB Type-C port at the bottom, and is highly likely Samsung will be going that way; SIM card tray/MicroSD slot at the top of the phone and also some kind of virtual navigation buttons that could be incorporated on the front of the phone instead of the traditional home button.

March 29 is when Samsung will be revealing the Samsung Galaxy S8 and apart from what is inside, everyone pretty much knows what it is like on the outside. Of course, these leaks will be subject to speculation and confirmation, so in the case that they are all fake, it shouldn’t come as a surprise. However, given the current frenzy surrounding the handset, these leaks can be given the benefit of the doubt.

The end of the month could not possibly come any sooner.