HMD Global, the Finnish company that owns the rights to use Nokia’s brand on smartphones and tablets, today launched three new Android devices that are of different price range and will go on sale starting April. 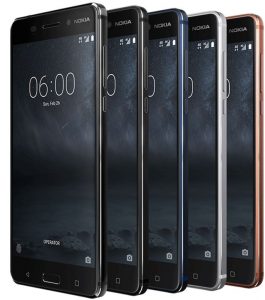 The Nokia 3, Nokia 5 and Nokia 6 were the new Android devices that HMD Global launched at the Mobile World Congress in Barcelona.

Starting with Nokia 6, it is an all metal phone with 2.5 Gorilla glass on front and a physical home button that doubles as a fingerprint scanner. You have a 5.5-inch 1080p display, Snapdragon 430 processor paired with 4GB RAM and 64 GB storage (expandable up to 128GB).

Priced at 229 euros ($241), Nokia 6 features dual amplifiers and supports Dolby Atmos sound technology. For pictures, you have a 16MP primary camera with f/2.0 aperture, Phase Detection Autofocus and dual-LED flash. There is an 8MP front snapper for selfies. The battery is of 3,000 mAh. As for operating system, the device will run Android 7.1.1 Nougat out of the box.

Nokia 3 and Nokia 5 are trimmed down versions, for those who are on a budget or need a smaller screen size. Nokia 3 is a 5-inch 720p display phone powered by a quad core processor paired with 2GB RAM and 16GB storage (expandable). It runs on Android 7.0. In terms of pictures, you have a 8MP back and front cameras with autofocus. Nokia 3 is priced at 139 euros ($146).

The last is the Nokia 5 that boasts of a 5.2-inch 720p display and is powered by a Snapdragon 430 processor. The RAM is of 2GB and for storage you have 16GB (expandable via microSD). The camera set up includes 13MP on rear and 8MP on front for selfies.

At MWC, HMD Global also relaunched the Nokia 3310, using nostalgia to win over its former user base. The feature phone known for its sturdy construction has a 2.4-inch QVGA color screen, 2MP camera, microSD slot and 22 hours of battery life. Color options include yellow, red, gray, and dark blue. The new Nokia 3310 will retail at 49 euros ($51)