A new picture of the upcoming Moto G5 Plus has leaked online. Posted by a Google + user in Brazil, the picture shows a branding sticker on the display, revealing the specs. 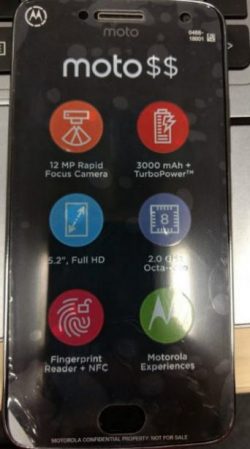 The Moto G5 Plus has been in the rumor mill for many weeks. Even before the latest leak, the design and highlights of the device were already made public, thanks to reports and recent renders of the G5 and G5 Plus from a case maker.

Being one of the most successful series for Motorola, the G lineup and its refreshes have not disappointed fans in the past. In line with the recent rumors, the latest leak as well reveals a 2.0GHz octa-core processor and a 12MP “Rapid Focus Camera”, Fingerprint reader and support for NFC.

However, the display size was opposed to what was earlier hinted. The new leak reveals a 5.2-inch 1080p display instead of a 5.5-inch screen. There are no contradictions on the battery and operating system.

The G5 Plus will be powered by a 3,000 mAh battery with support for TurboPower quick charging. The operating system will be of Android 7.0 Nougat. Under the hood, you also have a 4GB RAM and 32GB internal storage.

There is a physical Home button that will also double as a fingerprint scanner. With regard to the design, it resembles close to the G4 Play that was released last year. The latest is expected to flaunt a metal unibody enclosure as well.

Besides G5 Plus, specifications sheet of the Moto G5 earlier leaked through a Brazilian tech site. It will have a smaller 5-inch Full HD (1920×1080) display, a Snapdragon 430 processor, 2GB RAM and 32GB storage. For power, the phone will be fitted with a 2,800 mAh battery.

The Mobile World Congress (MWC) is fast approaching and if reports are to be believed, fans will see the release of both Moto G5 and G5 Plus during the period.