Finally, we can speculate on the most probable date for Meizu to release its much-awaited Meizu M5s. The Chinese smartphone maker has started to send out invites for an event it is holding on February 15. 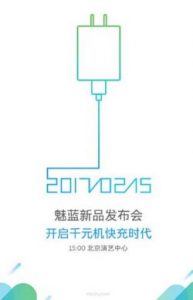 The invite does not mention the name of a device or hint at a particular product. It just furnishes details of the day, time and place.

For those who want to follow up, the event will take place at Beijing Performing Arts Center, China on February 15 at CST 15:00. One more important detail the invite image reveals is the mysterious device’s fast charging capabilities.

Just a day back we reported of a leaked image showing the packaging box with a charger and USB cable. The leak revealed the model number as ‘M612Q’ and a Flyme user interface running on top of Android 6.0 Marshmallow.