PC components giant Corsair has just announced its first gaming PC called the Corsair One as it made its presence felt to the world on the latest edition of Maximum PC’s March issue.
After years of supplying the best components in the business, from memory cards, cooling systems, cases and battery packs, the company has finally decided to go ahead and create its very own brand of gaming focused PCs, with the Corsair One being the first of many. This is a great step, because Corsair is looked upon by many enthusiasts today in making the best PCs out there, so using its knowledge and resources to build the ultimate gaming set-up seems like a no-brainer. It has all the parts, but just needs to put it together. 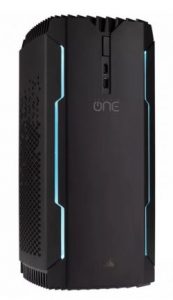 PCWorld reports that the system will probably be a small form-factor PC, but will hold enough muscle inside to power even the likes of Witcher 3 to a 4K widescreen display. Judging by the fact that there is an HDMI and USB port in the front of the system, it could be possible that the system could also be VR ready.
Corsair’s “Category-defying” product is being kept well under wraps by makers but promises to be state-of-the-art in architecture and performance. The Verge mentioned in their article that the company will be building the PC from the ground up, so we should probably expect to see some radical design additions towards the internals of the PC. The look of the unit is very smooth though, and one can make out by the side panel vents that it will be able to vent out all that excessive heat from the inside.

AnandTech reports that the front of the Corsair One resembles another case of theirs called the Carbide 330R, as well as the Obsidian 550D to an extent, but does not maintain the minimalist design that is seen consistent with the latter two. The tower is a little too shallow in order to fit a complete ATX motherboard, but other high-end computer components will have no problem fitting inside.

Apart from the above-mentioned details, Corsair themselves have not revealed much else about the product. Corsair’s move to make their very own high-end gaming solution will require customer support handling as well as unique marketing methods, since this will probably be the most expensive Corsair product in its portfolio till date. They will need to make this PC every bit as competitive to what is currently available in the market since the game out there is pretty tough for new entrants. Lenovo and Samsung have both entered the gaming segment as well, with their own offerings.

Corsair’s offering does sound promising, since its parts are already being used by all major manufacturers anyway. So it will not be difficult to recommend. But is it the chosen one? We will only know once it releases.