Google Maps just rolled out an update for Android users that will make traveling around a lot easier. Their latest update brings real-time commute information for getting to the destination point without much hassle. 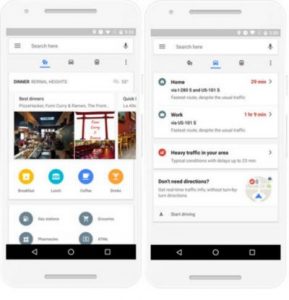 With the latest update, when a user swipes up from the main screen of the app, they will be shown three tabs – places, driving and transit. Each place shows a distinct route to the nearest restaurant, or a suggested route to beat the bustling traffic. This could be a game-changer for Google and make it a pretty clear option for those who want to make the most of their commute. Here’s how each of them differ.

Tapping on the Places option shows a list of suggested restaurants around the locality with labels to best associate them, such as ‘best dinners’, ‘cheap eats’, or ‘business dining’. There are more tabs within the option to scroll through if users are searching for other things such as groceries or banks. It will even show images to these places so that users will know of these places before-hand.

What this tab does is, it will auto-fill commute time to and from work or home, according to ZDNet. This way, users will know exactly how long they will take until they reach. The commute time will also let users know if there is an accident or any construction happening on the way in real-time. So, users will be prepared before-hand before having to take on the impending traffic scenes.

The Transit tab will display information about bus stops and train schedules. It will even show the real-time information as to what routes to take. Similar to directions like in the traditional directions option in Maps; only this time, it’s lot more accessible and streamlined.

The app will also have a minor UI design change, making it look a lot smoother and accessible. With the three tabs at the bottom to swipe with, going through different menus all the time. The new update is only available for Android users right now and is slowly being rolled out.